New Orleans church, home to ‘murder board,’ eyes new tribute to victims in stars on ceiling 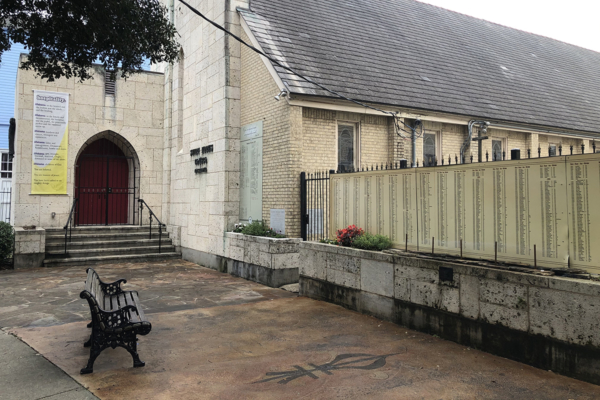 St. Anna’s Episcopal Church in the Treme neighborhood of New Orleans, Louisiana, has posted the names of homicide victim outside the church since 2007. Photo: David Paulsen/Episcopal News Service

[Episcopal News Service] Though far from a good year, 2019 was a statistically better year for New Orleans, Louisiana: The city recorded 119 homicides, the fewest in nearly 50 years, further distancing itself from its reputation just a decade ago as the unofficial “murder capital” of the United States.

But the recent decrease in deaths has not alleviated the human toll that violence, particularly gun violence, takes each year on the people of New Orleans. They still are murdered at a higher rate than residents of all but three other major U.S. cities. Their deaths still leave holes in the lives of surviving loved ones and the community.

And their names continue to be added to the “murder board” at St. Anna’s Episcopal Church. Since 2007, the congregation has maintained and updated this memorial list outside the church in the city’s Tremé neighborhood just north of the French Quarter. The memorial now contains more than a thousand names of people killed in and near the city, and even with homicides decreasing, more than 100 new names are posted each year.

“That’s still an intolerable amount,” the Rev. William Terry, rector of St. Anna’s, told Episcopal News Service by phone. “We have a large part of our community that lives in a deep longing and a deep and profound sadness,” he said, and the church’s lament for that loss of life transcends any public policy success extolled by government leaders.

The permanent memorial at St. Anna’s, covering a fence next to the church, lists each victim’s name, age, date of death and method – “shot” is the most common – but it only covers 2007 to 2012 because the congregation ran out of room on the fence. So, the current year’s homicide victims are written in marker on a separate board attached to a nearby church wall. The congregation envisions a new memorial big enough to memorialize every victim, by representing them as a sky full of stars on the ceiling inside the church.

Joel Dyer calls it “Stargazers.” He is the local artist who came up with the idea for the new memorial and now is trying to raise money to install it at St. Anna’s, where he has been a parishioner for most of the past decade. The ceiling of the nave and sanctuary would be painted blue, and 2 1/2-inch gold stars would be arranged in a grid, with enough estimated room to memorialize up to 5,000 murder victims.

“I thought ‘Stargazers’ would imply a little hope,” Dyer, 74, said in an interview with ENS, adding, “our hope is to keep our kids off that ceiling.” 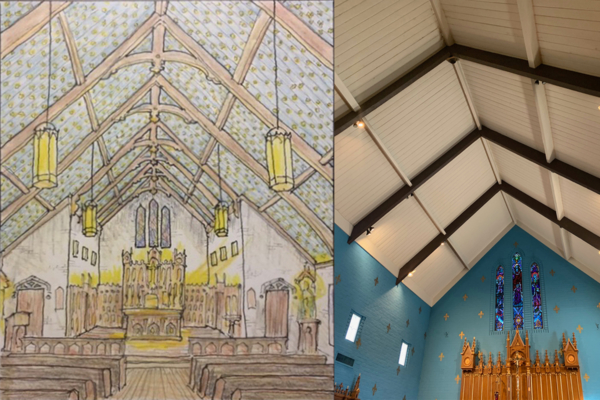 Artist Joel Dyer, a parishioner at St. Anna’s Episcopal Church, sketched the design on the left for a future Stargazers’ tribute to murder victims, which would be displayed on the ceiling of the church, shown in the photo on the right provided by Luigi Mandile.

One star will shine particularly bright in the eyes of this diverse congregation on Esplanade Avenue. Robert Atkins, 21 years old when he was shot and killed on Oct. 20, 2016, grew up attending the church and had served as an acolyte since he was 5 – a “perfect little boy,” his mother, Althea Atkins-McCall, remembered in a phone interview. 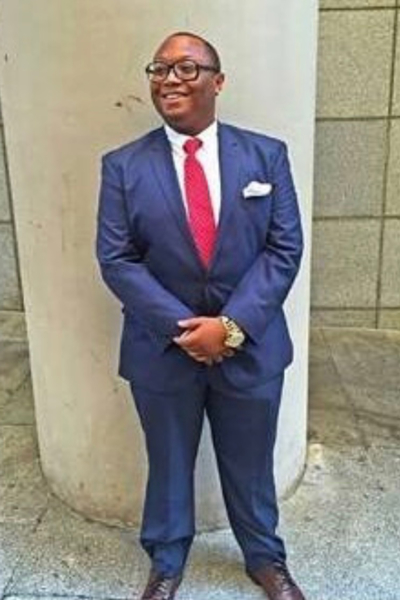 Robert Atkins, 21, was shot and killed in October 2016 less than two weeks after this photo was taken while he was attending his mother’s wedding. Photo courtesy of Althea Atkins-McCall

The connection between her son, her family and St. Anna’s goes beyond a name on a memorial. “It’s a little deeper for me, because we actually were very much involved in the church,” Atkins-McCall said, and though she now lives in the capital city of Baton Rouge, she still has “just a great appreciation for the level of commitment that Father Terry has for the community and the members of his church.”

Atkins’ murder remains unsolved, and his mother is grateful for ways “of keeping my son’s name alive.” Though his killing was too recent to be included on the permanent list at St. Anna’s, Atkins-McCall donated a bench in his name that was installed next to the sidewalk in front of the church memorial, so anyone who visits can sit in contemplation and remembrance.

Terry had only been rector at St. Anna’s a couple years when Hurricane Katrina dealt a devastating blow to New Orleans in 2005. Once a city of nearly 500,000 people, New Orleans lost more than half its population in Katrina’s aftermath as it struggled with recovery efforts, but the number of homicides remained high. When murders reached 209 in 2007, the city’s estimated per capita murder rate topped that of any other major American city.

Early in 2007, thousands of people marched in New Orleans to protest the killings and what they saw as public officials’ inadequate response. After the march, Terry began talking to a deacon about what St. Anna’s could do. They came up with the idea of publicly naming each of the victims, and “we’ve really been doing that ever since,” Terry said.

In addition to writing the names on a display outside the church, St. Anna’s began incorporating a reading of the latest victims’ names into Sunday services, which typically draw about 120 worshipers. Church staff members scour local media outlets each week for reports of killings and follow up with authorities to obtain information about the victims.

Other churches asked to receive the lists compiled by St. Anna’s, and now the lists are sent out every week by email, usually on Thursdays. They include people killed outside of the city limits, in communities that are part of greater New Orleans.

The church is “literally on the border between two worlds,” Terry said, between some of the city’s wealthiest neighborhoods and those struggling with deep poverty. That intersection is reflected in the congregation, which Terry said includes parishioners from a mix of backgrounds, many of them middle-class or low-income residents.

Crime is driven by a range of factors, and fluctuations in crime rates defy easy explanations. Terry, though, noted that extreme poverty, an affordable housing shortage and limited job opportunities continue to plague New Orleans, and the local black community, which had made up a significant majority of city residents, has been greatly diminished since Katrina. 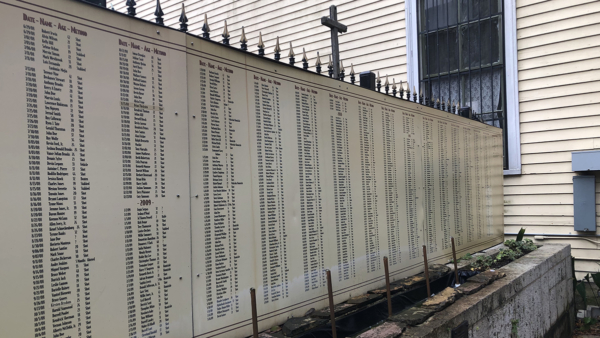 The ‘murder board’ at St. Anna’s Episcopal Church in New Orleans, Louisiana, is only big enough to fit the hundreds of names of homicide victims from 2007 to 2012. The church is looking for a long-term solution to memorialize all the victims since 2007. Photo: David Paulsen/Episcopal News Service

The church regularly gets visitors to the homicide memorial. Terry recalls a police sergeant who spent about 15 minutes one day looking over the names before approaching the rector in tears: “I saw four of my high school friends on your murder board,” he said.

Mere numbers can dehumanize crime victims, Terry said, and “most of these people live in poverty. They have no memorials.” He thinks simply sharing their names is a step toward giving them some dignity in death, though the congregation doesn’t stop there. St. Anna’s also supports neighborhood children and their families through its Anna’s Place program, and it is raising money now for an ambitious expansion of those efforts called the Dodwell House.

“The ‘murder board’ is a memorial. It’s a public spiritual statement to the world that life maters. But that’s not good enough,” Terry said. “We have to become disrupters in cycles of violence, so the Gospel begins to take shape in the community.”

As the “murder board” grew to include more than a thousand names, the list stretched across the church’s fence, eventually running out of room. Terry said one option the congregation is considering is to reinstall the permanent memorial so it is configured to fit nearly 3,000 names, but still only through 2017, nearly 3000. The longer-term solution is the Stargazers project.

The ceiling of the church is large enough to accommodate stars for all the victims since 2007. Plans also include a computer kiosk, so visitors can search victims’ names and find where on the ceiling each victim’s memorial star is displayed.

And there will be room for the memorial to expand as more residents of the New Orleans area succumb to deadly violence.

“It can be discouraging, because it’s so common,” Atkins-McCall said.

Her family was fortunate in many ways. She and her family immigrated to the United States from Guyana in 1989 and settled in New Orleans, where her grandmother made sure they attended church, first at Christ Church Cathedral and then at St. Anna’s. 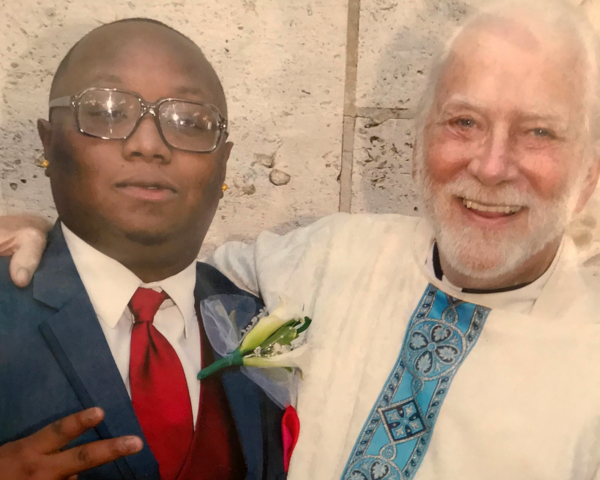 Robert Atkins poses for a photo with The Rev. Bill Terry at St. Anna’s Episcopal Church, where Terry presided at the wedding of Atkins’ mother. He had been active in the congregation for most of his childhood. Photo courtesy of Althea Atkins-McCall

“We had this very strong Christian-based upbringing,” she said, and she instilled the same in her son, who was born in 1995.

Robert Atkins was “everything you wanted in a kid,” she said, but tragedy struck early in his life. His father, who had been Atkins-McCall’s high school sweetheart, was shot and killed a few months after their son’s first birthday.

Despite that loss, Robert grew into a gifted student who loved art and football, his mother said, and St. Anna’s “became home and became part of our family.”

Atkins was taking a break from college in 2016 and working an overnight security job when he was murdered. He would call his mother after getting home from his shift, and when he didn’t call that morning, she grew worried. Later that day she learned from his girlfriend that he had been shot in a car, pushed into the street and left for dead.

The killing was all the more jarring because it came at a time of celebration: Less than two weeks earlier, Robert Atkins had been all smiles while attending his mother’s wedding at St. Anna’s. Terry, who presided at the wedding, later led a candlelight vigil with the family at the scene of Atkins’ murder.

Atkins-McCall still holds out hope that police will find who killed her son, and she sometimes checks in with investigators, to see if they have any new information and to remind them that she still wants answers.

When she gets discouraged, she looks back on her son’s last Instagram post, which she said seemed both to foreshadow his death and show his faith remained strong. The photo appeared to be of a page from a Christian devotional, leading with the sentence, “you are on the right path.”

“I’m behind you Lord!” he wrote. “You gotta trust him and trust yourself. Your time is NEAR.”

“He was an awesome kid,” Atkins-McCall said. “Whatever God placed him here to do, it was accomplished.”