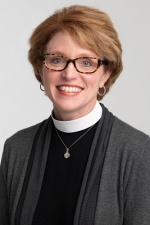 A native of Mississippi, Bishop Duckworth, received her BA in English and History in 1997 from Millsaps College. She was ordained a priest in 2001 after receiving her M.Div. from The General Theological Seminary.

She is married to James Duckworth and has two sons, Nicholas and Tucker.