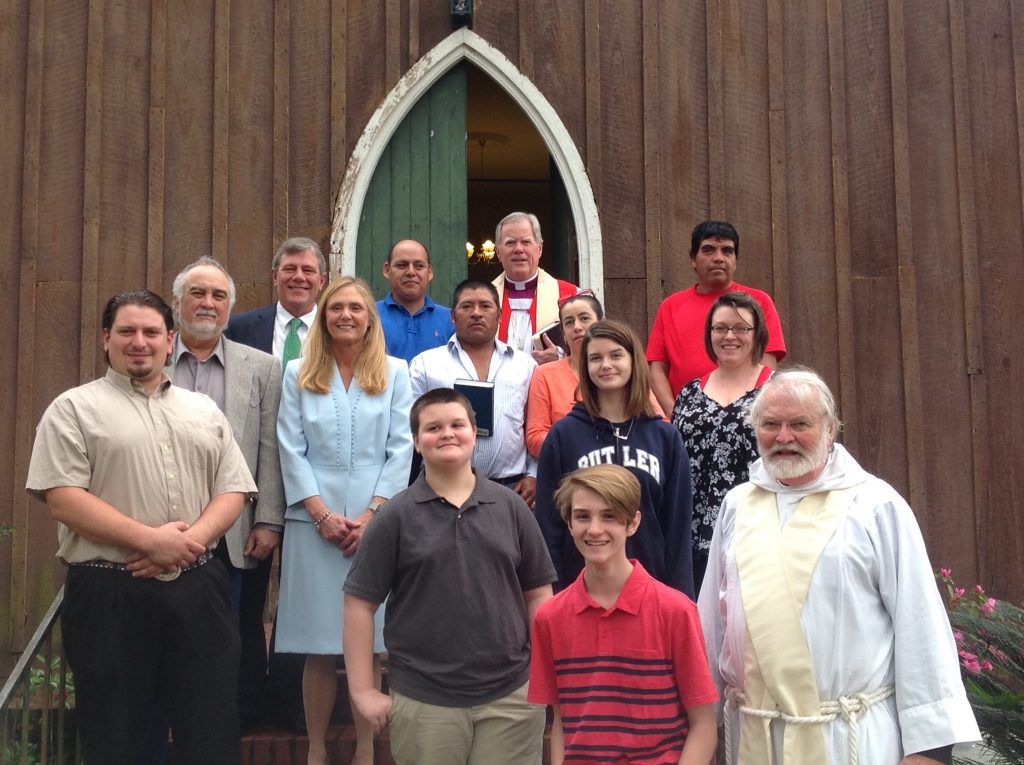 [Photograph by Jane Baldwin-Kent] The Rt. Rev. Charles Jenkins, Tenth Bishop of Louisiana, and the Rev. Jerry Phillips, priest-in-charge, pose with those being confirmed and received at Church of the Nativity, Rosedale, on Sunday, February 19.

I want to thank Editor Karen Mackey for the opportunity to extol the virtues of the Episcopal Church of the Nativity in Rosedale. It comes by invitation, apparently resulting from our having had thirteen respondents ready for Bishop Jenkins in our scheduled visitation in February while Bishop Thompson was on sabbatical. Both Bishop Jenkins and Karen were curious about how we managed to have prepared for one to be baptized, four confirmed, eight received, and one reaffirmed in such a small family of saints. If you’re counting and trying to resolve thirteen respondents with fourteen responses, one fifteen-year-old female was both baptized and confirmed. They asked me how that all came about.

As Tevye in Fiddler on the Roof answered decisively the question of how various Jewish traditions started, I replied  to each of them separately: “I’ll tell you. I don’t know.”

As you might suspect, that answer neither satisfied the former in pressing me further nor deterred the latter in asking me to share such information in Churchwork. It is, nevertheless, accurate. I know of nothing the members at large, the vestry, or I did in the months preceding that was so different from what we’ve always done during my nine-year tenure here. My best response to them both then and now is, “I planted, Apollos watered, but God gave the growth” (1 Corinthians 3:6).

Please be aware that I’m not trying to tone down my enthusiasm or diminish the significance of these events. I am truly surprised and thrilled by it all. However, so as not to disappoint my erudite inquisitors, especially Karen (who is counting on fifteen hundred words from me by the end of the day), I hereby offer the following oblations that may qualify in determining our uniqueness.

First of all, at Nativity we send our children cost-free to Camp Hardtner. Speaking as a former church camp counselor, I know of no greater investment in the spiritual lives of our youngsters and therefore the future of our church family than that offered by an annual, God-centered, camp experience away from home with peers from across two Louisiana dioceses. It is faith-building formation of the grandest sort. For eight straight years, now, we have sent each summer anywhere from three to six children to Camp Hardtner. The oldest, Caleb Kent, is our first graduating senior from that bunch and has just enrolled at LSU. He and his brother David, still in Brusly High School, are fresh off the final week at Camp Hardtner where they both served as voluntary counselors for Camp Able: the designated week for disabled campers. I hereby proudly bequeath Caleb to Father Drew Rollins and St. Alban’s Chapel.

There was a time when we could afford this significant expense by requesting a check from our church treasurer. In a belt-tightening move four years ago, we began a yearly campaign for donations, instead. So far we’ve been in the black. My annual letter heading is “Dear Member, Former Member, Prospective Member, or Friend of Nativity:.” That’s quite a cloud of witnesses.  Bishop Thompson, I’m getting pretty good at hitting up Episcopalians for hard cash. If you need some pointers, let me know. Through Camp Hardtner we seek to empower our kids.

Second, at Nativity, not unlike the Book of Common Prayer, the Daily Office, and the Eucharistic Propers, we deliberately celebrate Scripture. We have two scheduled Wednesday Bible study classes, one in the morning for elderly folks who don’t get out at night and one in the evening. That one, of course, also gives us an excuse to have one of our renowned meals together. At a recent gathering—while I was on vacation, no less—the evening class had a record attendance of fifteen. To put that in perspective, that is the same number reported on our parochial report of 2016 for our average Sunday attendance. Six of these class members, one of them Jewish, don’t attend Sunday services, which qualifies this effort as outreach.

The scholarly conclusions of form criticism and historical literary deconstruction certainly have their place in the examination of the written word. But that is not sufficient reason to deter us from respect for or study of what tradition has handed to us. A close examination of those last two sentences will reveal all three legs of the Episcopal stool. I consider it both-and, not either-or. As a high school and college instructor of British and American literature for forty-plus years, I find value in the written story itself and in the characters themselves.  Never can I recall a student downcast over the arguments of authorship or historicity when we have lived by proxy both the foibles and triumphs of such characters as Atticus Finch (Harper Lee’s To Kill a Mockingbird), Mama (Lorraine Hansberry’s A Raisin in the Sun), Silas Marner (George Eliot’s Silas Marner) and Lady Macbeth (William Shakespeare’s Macbeth).  Instead, I have seen self awareness enlightened, relationships enhanced, and, I think, lives transformed by good literature.

The story of Scripture enhances one’s understanding of many significant Gospel truths.  Among them are the need for Jesus to fulfill a sacrificial role, the qualifications for sacrifice, his being a priest forever after the superior order of Melchizedek, the nature of his family-style miracles, his lineage, the manner of his death, the tearing of the Temple curtain that until his death limited access to the Most Holy Place, his function as Passover, the events of Pentecost, the spiritual nature of the already-but-not-yet kingdom, the once-for-all nature of his sacrifice, the role of the Holy Spirit, and the destruction of the Temple.

A former Old Testament professor of mine at Concordia Seminary in St. Louis, Dr. Norman Habel, was once asked by a student if the Tree of Life in the Garden of Eden was a literal tree: “What difference would it make,” he said, “in your understanding of the nature of God?”  He wasn’t the first theologian to answer a question with a question. I consider his response a succinct axiom that at once acknowledges the value of textual criticism while liberating the sincere disciple who merely wants to know the narrative that God through the Holy Spirit has placed in the hands of the modern reader. That makes it sacred. And it has internal integrity, to boot. Dr. Habel’s concise distillation is, in fact, the criterion which allows the greatest story ever told to remain current and maintain its place in the canon of good literature.  We tell that story.

Third, at Nativity we believe in the power of hardcopy communication. I know all of the good arguments about the frugality and distributive superiority of electronic transmissions. And we do post all pertinent information on our webpage. But I also know human nature. We send out the monthly trifold edition of the Nativity Newsletter to all members, recent visitors (for a year), and selected interested parties. That means once a month we remind each recipient of the good news that the Kingdom of God is open for business, and the Episcopal Church of the Nativity is alive and well and currently occupying your hand. And there’s a chance that that single sheet of paper will find its way into a pocket or a purse or onto a coffee table where emails never tread. We unapologetically assert ourselves into the lives of people who matter to us in hopes that we might in turn serve and matter to them.

There are, of course, more subtle, less tangible factors of corporate personality that every parish family can delineate. Nativity has its share.

So, do I believe the preceding points answer the aforementioned question? No. No, I don’t. We’ve been doing all of that for nine years that I know of, during which we sometimes had no respondents for the bishop’s visitations. If you were to pin me down on a possible quid pro quo, I would say honorable mention goes to the declining revenues crisis we faced in the summer of 2016. The vestry devoted itself to two successive meetings on the topic. There were difficult discussions and frank exchanges. But we ended the latter meeting with a prayer circle, during which one parishioner asked God for more members. And they came. And they continue to come, along with some folks we haven’t seen in some time. However, if answered prayer explains our thirteen respondents in February, that puts it right back in God’s lap: not Nativity’s, not the vestry’s, and certainly not mine.

See? My Tevye answer was right all along. But now you at least know the rest of the story.  Except, of course, the acknowledgments: “Now to him who by the power at work within us is able to accomplish abundantly far more than all we can ask or imagine, to him be glory in the church and in Christ Jesus to all generations, for ever and ever. Amen” (Ephesians 3:20, 21).

Episcopal Church of the Nativity in Rosedale was established in 1858. The Rev. Jerry Phillip’s has served as the priest-in-charge since 2009.