Courageous Choices: A Sermon for the Feast of Blessed Frances Joseph Gaudet 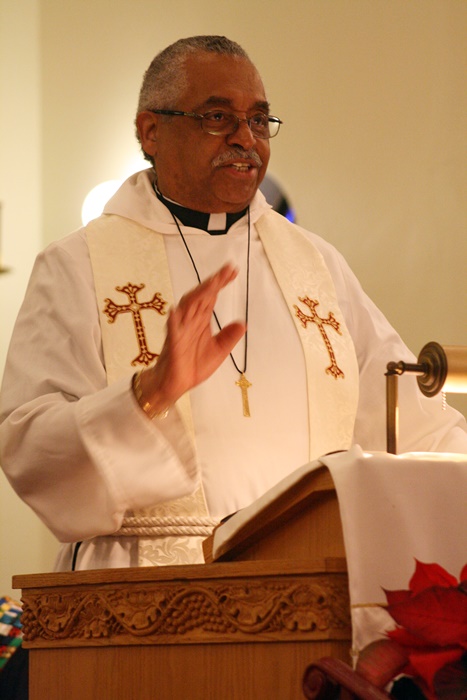 by The Rev. LeBaron Taylor

In the name of the one God, creator, redeemer and sustainer. Amen.

“Lord, when was it we saw you?” (Mt. 25:37)  (Pray: come Holy Spirit, empty me of me, fill me with thee, hide me behind the cross of Calvary, so that we your people may hear a word of truth, a word of love, a word of mercy, a word of joy from you.  Now, may the words of my mouth and the meditations of all our hearts be acceptable in thy sight, o Lord, our strength and our redeemer. Amen.

Beloved, as I read a short biography of Blessed Frances Joseph Gaudet, I was immediately struck by her courageous choices and they were incredibly courageous given the times in which she lived.

Not only that, she was a black woman stepping to the forefront on behalf of those who were considered “throwaways,” if you will, by many in positions of power and privilege and calling all the shots.

It was also a time when lynchings and race riots were prevalent throughout the post-reconstruction south and there was fierce opposition to education for the newly freed slaves.

Blessed Frances was born in a log cabin in Holmesville, MS, a few miles east of McComb in extreme poverty.  Her father left for the civil war, then at 8 years old, she moved to New Orleans with her mother and grandparents, attended public schools and for a short while was enrolled at Straight University.

Later, she was able to support herself as a seamstress and one would think given her impoverished childhood, she would concentrate her efforts on gaining what creature comforts she could for herself, but, “I was a stranger and you welcomed me, I was sick and you took care of me. I was in prison and you visited me.’ Then the righteous will answer, ‘Lord when was it that we saw you?”

Gaudet, after separating from her alcoholic husband, began working as a prison reformer.  Hear these words from an in depth article on Blessed Frances by Dr. Violet Harrington Bryan, English professor at Xavier University,

“She was motivated by compassion for the many poor blacks who were thrown into prisons for vagrancy and other misdemeanors, often in spite of their innocence, due to the lack of good legal counsel.

She visited the prisons for weekly prayer meetings for the next eight years and was most dismayed by the plight of young boys who were placed in the prisons with inveterate criminals and were often detained four or five weeks before they were tried.” (end quote)  Not much has changed, has it?   “Courageous choices.”

Like Moses, sent by God to free God’s people from Egyptian captivity, Gaudet, a woman committed to her Christian faith, saw her mission of helping impoverished black children as a call from God.

As she continued her work in prison reform, Blessed Frances began working on establishing “A school devoted to saving homeless negro children and teaching them a craft by which they could make a living,” writes Dr. Bryan.

With the assistance of the Times-Democrat Newspaper and prominent New Orleans white women, most notably Ida A. Richardson, an influential member of the Episcopal Church,  instrumental in organizing the Louisiana Diocesan Women’s Auxiliary, Gaudet was able to pay off the $3,000 mortgage  on the school that was built on 105 acres of farmland on Gentilly Avenue.  Remember, beloved, the times.  It was also a courageous choice for southern whites in those days to help blacks.

Because of age and failing eyesight, Blessed Frances began looking for long term sponsors for the school and because the Episcopal Church had strongly supported her efforts in prison reform and the education of black children, she decided to offer the school to the diocese with the understanding that it would continue to operate for those needy students.

However, if the property were ever sold, the proceeds would be used to continue the schooling effort.  That, unfortunately, did happen, but the diocese, along with the help of public and private social agencies, worked to meet the greatest needs of black folks in New Orleans.

In his book, “The Keys are Being Passed,” New Orleans native son, the Rev. Dr. Johnathan C. Augustine writes these words regarding education reform, “The Obama administration’s reforms are non-partisan.  Indeed, they build on the efforts of his republican predecessor, George W. Bush.

In a time of such pronounced partisanship, the question must be “Why?”  Why is it, with all the political differences between Presidents Bush and Obama, their stances on the issue of education reform are consistent?

Accepting the premise that education reform is part of the ongoing movement, in a time in which civil rights must also mean economic opportunity, the United States two major political parties embrace education reform as a pathway to economic development in communities that historically has lacked such opportunities.  Moreover, blacks, who significantly populate America’s public schools—especially in urban areas—have a deep interest in education reform, too,” (end quote)

Beloved, I recognize that is a long quote, but we need to be mindful of the urgency of the problem and of the legacy, the passing of the keys to us as a people, as Episcopalians by Blessed Frances Joseph Gaudet.  It is time for more “courageous choices.”

It is not a black problem; it is not a white problem.  For us to continue the work of prison and education reform that Blessed Frances started in this diocese, we need each other, we need the black and white keys on the piano to finish this symphony of harmony and achievement!

Saints of God, notice that the goats and sheep both responded in the same way, “Lord, when was it we saw you?”  Our distinction will be determined by the choices we make.  Will we look the other way and pretend we don’t see the Lord in the least of these or will we, like Blessed Gaudet and others, make “courageous choices?”  What say you, Christian?  Amen.

Photographs and video from the service can be found by clicking here.