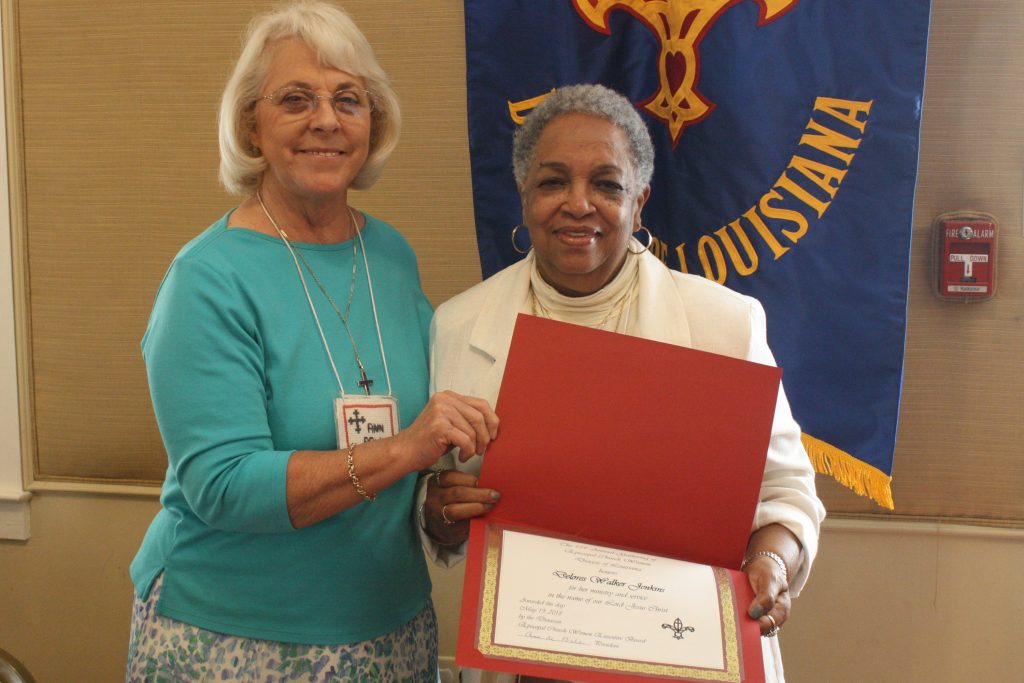 The 22nd Presentation of Honored Women
By the Episcopal Church Women
In the Diocese of Louisiana
May 19, 2018
Christ Episcopal Church
Covington, Louisiana
Recognized for her ministry and service in the name of our Lord Jesus Christ

Delores Walker Jenkins
Delores Walker Jenkins has been a faithful and active communicant in the Episcopal Church for
approximately thirty years. As a communicant of St. Michael and All Angels Episcopal Church, Baton
Rouge, Louisiana, she served faithfully and actively as a vestry member including serving as secretary,
Junior Warden, and Senior Warden, Altar Guild, Eucharistic Minister, ECW member, co-chairing the Baton
Rouge Deanery for two terms, a teacher at St. Michael’s Episcopal Day School, going on to becoming the
Director of St. Michael’s Episcopal Day School. Delores is guided by prayers and her relationship with
God which lead her to St. Patrick’s Episcopal Church, Zachary. where she continues to be faithfully active
as she serves on the vestry, Altar Guild, Sunday School, Bible Study and the women’s group, “The
Colleens”. Delores is the proud mother of three sons, all confirmed Episcopalians and ten grandchildren.

Beth Kimmell
Beth Kimmell, raised Roman Catholic, had been looking for a faith that would allow her and husband,
Glenn and their family to grow as Christians. In 1981 they found St. Patrick’s Episcopal church, where
both of their children were baptized, and the family was confirmed. Beth, a very proud grandmother of
four grandchildren, serves on the vestry and Altar Guild, as a LEM, youth group leader, and as a Christian
educator. She has also organized many fundraisers. In 1987, she founded St. Patrick’s preschool for three
and four-year-old children. Working as a volunteer, administrator, and interim director, she led the school
to grow from an enrollment of seven toddlers to one-hundred seventy-five children ranging in age from six
months to twelve years. Beth has been a very active member of ECW having served on the ECW Diocesan
Board, attended the Diocesan Convention as a delegate/alternate, and represented the Diocese of Louisiana
at Genera] Convention. She was instrumental in organizing a ladies group, the Colleens, which assists in
needed church improvements and meets for fellowship quarterly. Beth’s devotion and faithfulness are
shown as she continues to serve in church ministries.

Judy DeBlieux Knecht
A member of St. Francis Episcopal Church, Denham Springs, Louisiana since 2009. Judy Knecht has served
as president, secretary, and treasurer of the ECW and is currently co-chair of the Baton Rouge Deanery.
She is active in St. Francis knitting and beading group, “Hannah’s Hands”, the Altar Guild, and Hospitality
Team. She represents St. Francis Church volunteering at the Community Hands Food Pantry which feeds
the needy of Livingston parish. Judy and her husband were instrumental in saving the church items which
could be saved after the August 2016 floods waters receded from St. Francis. They took the items still
usable to their home for storage and safekeeping. Their home served as the church office until Cameron
Hall was refurbished. Judy and Gene share a marriage of forty-three years, a son and daughter, and five
grandsons. Judy’s devotion to God’s work is shown in her actions, not just in her words. She walks the
walk!