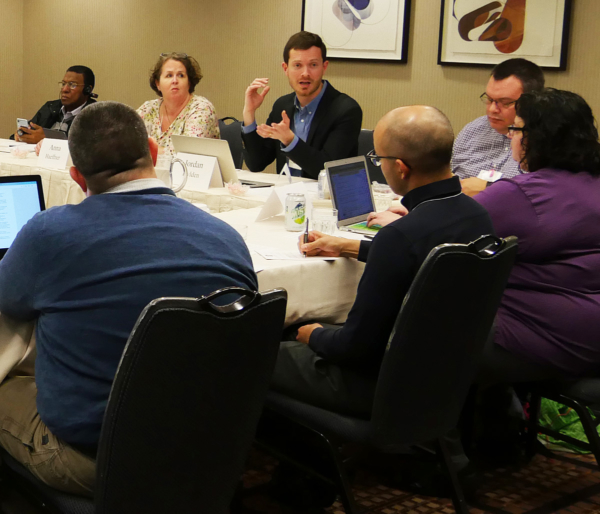 The Rev. Jordan Hylden, Diocese of Dallas canon theologian, suggests that the Task Force for Communion Across Difference ought to aim to craft “a generational peace” over the church’s differences about human sexuality. Photo: Mary Frances Schjonberg/Episcopal News Service

[Episcopal News Service – Rosemont, Illinois] The latest chapter in The Episcopal Church’s more than 50-year-old conversation about the full inclusion of LGBTQ people in the life of the church began this week with the goal of seeking “a lasting path forward for mutual flourishing” of those Episcopalians who disagree about the church’s stance on same-sex marriage.

The Task Force for Communion Across Difference’s mandate, found in General Convention Resolution A227, sets that goal and asks the group to find that path while acknowledging convention’s “clear decision” that Christian marriage can be a covenant between two people of the same sex or of the opposite sex and that the church is committed to providing access to marriage rites for all, while “affirming the indispensable place that the minority who hold to this Church’s historic teaching on marriage have in our common life, whose witness the Church needs.”

General Convention in July 2018 called for the communion task force as part of its decision to end (via Resolution B012) the church’s requirement that bishops give their permission for clergy to use the two marriage rites that the previous meeting of convention had authorized (via Resolution 2015-A054) for trial use by both same-sex and opposite-sex couples.

The Rev. Susan Russell, one of the task force conveners and a priest from the Diocese of Los Angeles who has advocated for years for greater LGBTQ inclusion in The Episcopal Church, acknowledged that the members of the task force bring “two polarities” to the table. The resolution calls for the 14 members to be evenly divided between those who believe marriage is only between a man and a woman and those who hold that marriage is a covenant between two people.

Russell said she believes that A227 calls on the group to find ways not only for individuals to move forward but “to create a process and a space where we can demonstrate to the wider church and then equip our church to show to a wider world what it means to mutually flourish across difference.” 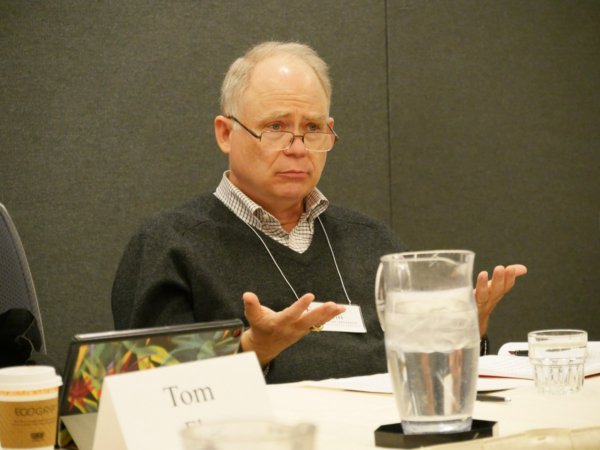 Tennessee Bishop John Bauerschmidt, one of the task force conveners, tells task force members that he hopes the church can find some peace amidst its differences. Photo: Mary Frances Schjonberg/ Episcopal News Service

Tennessee Bishop John Bauerschmidt, the task force’s other convener, told the group that he “was not tremendously involved in the church wars of the early part of this century and before,” but was instead a parish priest who “tried not to get too distracted” by the full-inclusion debate. Bauerschmidt opposes same-sex marriage and requires that priests who want to use the rites have the “pastoral support” of East Tennessee Bishop Brian Cole.

“I have observed that we have spent a lot of time – decades worth — fighting in The Episcopal Church around these issues of marriage and inclusion of LGBTQ people,” he said during the group’s round of introduction. “I’m really interested in, at this point, what the peace looks like.”

Fred Ellis, a longtime LGBTQ advocate from Dallas, where Bishop George Sumner opposes same-sex marriage, told the task force that he once co-chaired a diocesan reconciliation group to work on the differences among Dallas Episcopalians on human sexuality.

Anna Haeffner of the Diocese of Southwest Florida told the task force that her parish in Sarasota, Church of the Redeemer, is a “traditional, orthodox” congregation in a diocese where there are other congregations “that are not orthodox.” Same-sex marriages are happening in the diocese “but we’ve all been able to co-exist,” she said.

“I’m excited when you talk about us being able to talk with each other and not at each other,” Haeffner said. “We have to stop being angry or be able to get past the anger and have a conversation and figure out how we’re going to move on because it is heartbreaking to see our brothers and sisters to leave.”

The Rev. Jordan Hylden, Diocese of Dallas canon theologian and an opponent of same-sex marriage, told his colleagues that he liked the resolution’s emphasis on a lasting path forward.

“I think we’re charged with doing something that’s not just meant to last the next three years,” he said, suggesting that they ought to aim to craft “a generational peace” over the church’s differences about human sexuality. 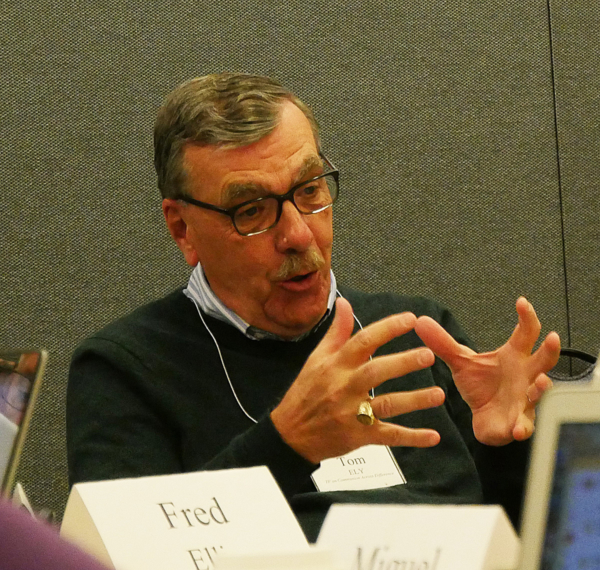 Vermont Bishop Tom Ely, who has long advocated for honoring same-sex relationships, up to and including marriage, said that work has also required attention to “the reconciliation that is necessary for that to happen.”

Underlying the debate about same-sex marriage are other issues, he said, including the “deeper question of authority and power, especially that of bishops” and what they understand their role to be. In addition, he said, there is also the question of whether tradition is something that is static or if “we’re talking about something that is unfolding.” He cited such issues such as the theological and biblical understanding of racism or the earlier ban on remarriage after divorce.

The church’s human sexuality conversation began in the late 1960s

The Episcopal Church has been debating such issues at least since 1968, when what was then known as the Joint Commission on the Church in Human Affairs asked the General Convention to initiate a study of homosexuality.

At the commission’s recommendation, convention said in Resolution 1976-A069 that “it is sense of this General Convention that homosexual persons are children of God who have a full and equal claim with all other persons upon the love, acceptance, and pastoral concern and care of the Church.” It also called on the church (via Resolution 1976-A089) to “engage in serious study and dialogue in the area of human sexuality, (including homosexuality) as it pertains to various aspects of life, particularly living styles, employment, housing, and education.” Bishops and deputies also passed resolutions asserting that “homosexual persons” have the right to full and equal protection of the laws and calling for a study of ordination of “homosexual persons.”

Every General Convention since then has included debate on some aspect of the issue.

What is “mutual flourishing?”

Task force members this week grappled with what General Convention meant by “mutual flourishing.” Russell told Episcopal News Service that the conversations were “deep and challenging” and involved the questions of “what we [each] needed to mutually flourish, what we had to give up in order for others to mutually flourish and what the promise was in both of those things for the church.”

During a discussion about what each person needed, Hylden seemed to echo those members of the task force who oppose the church’s stance on marriage when he said, “I need to know that the traditional view of marriage has a place, to be defined later, in the teaching and polity of this church. If it didn’t, then I really probably shouldn’t be a priest of this church.” 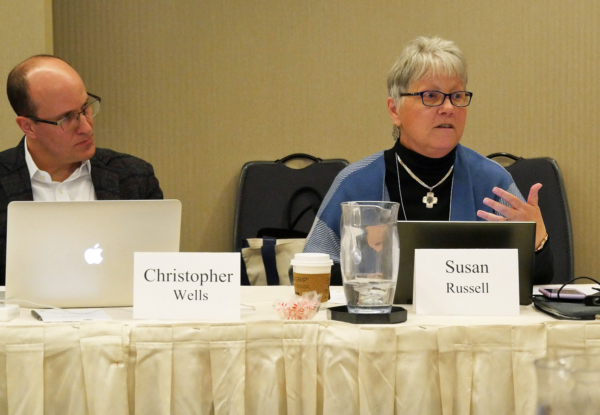 The Rev. Susan Russell, one of the task force conveners, speaks about the costs and benefits of mutual flourishing while Christopher Wells listens. Photo: Mary Frances Schjonberg/ Episcopal News Service

Mutual flourishing, Russell said, means she has to give up the idea that everyone is going to accept that she is married to her wife. “And I have to be married to my wife,” Russell said. “As a baptized member of this church, I have to have full access to the sacrament of marriage, which I do.”

Just as she cannot discount those with whom she disagrees as anything less than beloved of God, Russell said, neither will she allow others to be blocked from full inclusion in the church because of someone else’s theology.

The Rev. Tanya Wallace, a priest in the Diocese of Western Massachusetts who is in a same-sex marriage, said for her the issue isn’t a difference of opinion; “it’s who I am.” She doesn’t want the church to become “a place where anyone has to wonder if there’s room at the table” for people like her and “for people who disagree and with whom I disagree.

The Rev. Scott Garno, a priest in the Diocese of Albany, said he opposes same-sex marriage but described his friendship with Wallace that began when they served on a 2012 General Convention legislative committee. They see “each other as fellow Christians” who trust each other’s motives, he said.

“For those in the minority position it feels like the polity is pushing the policy further and further to the point where it feels like there isn’t always a place in the church for this particular minority’s voice,” Garno said. Mutual flourishing for him, he said, requires that the resolution’s idea of the “indispensable place” that the minority should have in the church must be lived out, “not just individual voices but actually living out in our politics and policy.” 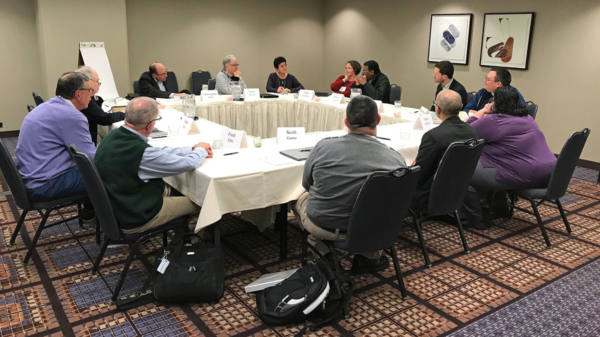 The members of the Task Force for Communion Across Difference spent two days in a hotel near Chicago O’Hare International Airport discussing how to help Episcopalians talk with each other about difficult issues. Photo: Mary Frances Schjonberg/ Episcopal News Service

As their meeting ended on March 21, the task force members agreed that mutual flourishing within The Episcopal Church means:

“Our hope is that the work that we’ve begun here can be a model for how other communities throughout the church can likewise engage in courageous conversations across difference, finding that the commonalities are greater than the differences and finding our path forward to truly enable all members of the body to mutually flourish,” Russell told ENS.

Perhaps the work of the task force, she said, is something the church can offer “as a witness to a country and to a world that is increasingly polarized and divided.”

To that end, the task force plans to offer to the church a process for groups to have the kind of conversations that it had over two days here. And, Russell said, the committee needs to fulfill its mandate to consult Episcopalians who represent the church’s diversity as well as with other Anglicans and ecumenical partners. “The scope of our work is still evolving,” she said.