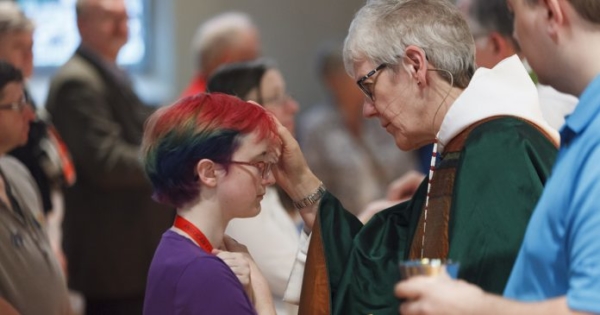 Sydney Brouillard-Coyle (left), a youth delegate from the Diocese of Huron who identifies as gender non-conforming, queer and asexual, receives a blessing from Primate Linda Nicholls at the closing Eucharist of General Synod 2019. Photo: Geoff Howe/Anglican Journal

[Anglican Journal] The Anglican Church of Canada General Synod’s failure to pass a resolution to amend the marriage canon to expressly allow solemnization of same-sex marriage, followed by a communiqué from the House of Bishops effectively commending diocese-based decisions on the matter, has triggered a wave of responses across the church. Bishops, priests, laity, officers and deacons alike have weighed in with concerns about the decision. Some bishops, including then-Primate-elect Linda Nicholls in her capacity as bishop of Huron, have outlined plans to exercise a local option for same-sex marriage in their dioceses.

In statements released after the vote, multiple dioceses declared their intention to perform same-sex marriages regardless of the marriage canon vote—basing their decisions on General Synod’s approval of the document “A Word to the Church,” which affirms “diverse understandings of the existing marriage canon” and that “the existing canon does not prohibit same-sex marriage.”

The initial announcement of the vote results left many synod members visibly in shock, with some crying. Almost immediately, delegates approached the microphones and asked about the process by which General Synod could reconsider a vote. But Primate Fred Hiltz, acknowledging the “pain in this place,” soon moved to dismiss synod for the night.

The emotional upheaval caused by the results led to official statements from all levels of the church. First to respond on July 15 was the House of Bishops, whose members had played the decisive role in voting against the motion.

“We, members of the House of Bishops of the Anglican Church of Canada, see the pain and anguish inflicted on LGBTQ2S+ people, on members of the General Synod, across the church, and in the world, as a result of the work and the vote on the matter of Canon XXI, concerning marriage,” the bishops’ statement read. “We see your tears, we hear your cries, and we weep with you. We have caused deep hurt. We are profoundly sorry.”

The bishops noted that General Synod had “overwhelmingly approved” the “A Word to the Church” document and that the bishops affirmed the right of Indigenous peoples and communities to “spiritual self-determination in their discernment and decisions in all matters.” But perhaps most consequential was their declaration that different levels of the church may make their own decisions on the matter of same-sex marriage.

“We are walking together,” the bishops wrote, “in a way which leaves room for individual dioceses and jurisdictions of our church to proceed with same-sex marriage according to their contexts and convictions, sometimes described as ‘local option.’”

Prolocutor Cynthia Haines-Turner and deputy prolocutor Peter Wall next released a statement which acknowledged the “pain, hurt and anguish of many people in this General Synod and beyond, particularly in the LGBTQ2S+ community, their families and friends,” and noted the support of synod for the affirmations in “A Word to the Church.”

Their statement also alluded to a proposed constitutional review before the next General Synod in 2022, later adopted by General Synod as Resolution C005. The prolocutor and deputy prolocutor, it said, “strongly endorse the proposed actions of this Synod calling for work, in the next triennium, on our governance structures, size and composition of synod, and planning for the future.”

A third statement came from clergy and lay delegates at General Synod, who noted that their respective orders had voted “by overwhelming majorities” in favor of the marriage canon amendment, and that they were “saddened and dismayed” that the change had been blocked by the vote in the Order of Bishops.

The lay and clergy delegates who signed the statement affirmed “the full inclusion of LGBTQ2S+ people in the life, leadership, liturgies and sacraments, including marriage, of the Anglican Church of Canada.” Basing their statement on “A Word to the Church,” they affirmed that “same-sex marriage can and will proceed by local option.” They apologized for the “hurt and harm that has been caused by the actions of this synod and by our church to LGBTQ2S+ people” and called for the church to “end this harm.”

As the vote revealed, the Anglican Church of Canada is not of universal opinion on same-sex marriage. On July 18, the Arctic House of Bishops — which includes some of the most outspoken opponents of the failed marriage canon amendment — released a statement declaring that General Synod “has given us permission to decide for ourselves what direction we should take. We choose now to walk as the self-determining Anglican Church of Canada in the Arctic.”

Concerns that this statement meant the diocese might be leaving the church prompted a clarifying statement from the Arctic bishops: “The Diocese of the Arctic remains a diocese within the Anglican Church of Canada, but must distance itself from those who violate the marriage canon. The implication of this is a state of ‘impaired communion.’ By using the phrase ‘self-determining,’ we are reserving the right not to affirm or submit to decisions that violate the doctrine of the church on marriage.”

Speaking to the Anglican Journal, Bishop David Parsons highlighted the mission statement of the Arctic diocese and its right to self-determination in line with biblical teachings.

“We have not left,” Parsons reiterated. “We are following the teachings that have gone down through the centuries…ever since the missionaries first came to the Arctic and brought the gospel which we as Arctic people embrace. We’re continuing that, and as weak as we are, we will continue to seek God.”

The Association of Anglican Deacons in Canada board released its own statement on July 20, noting that the process and decision on the marriage canon vote had been “shocking, hurtful, frustrating and deeply disappointing” for many deacons.

The statement expressed confusion over the failure to change the canon by a “small minority of our church,” whom they described as “holding the church back from joyfully offering everyone, without restriction, the sacrament of marriage. This ‘no’ to same-sex marriage seems devastating to our work as deacons.” It pointed again to the affirmations in A Word to the Church, the continued blessing of same-sex marriages using the “local option,” and forthcoming efforts to review the governance structures of General Synod.

In the wake of the vote, bishops and archbishops in numerous dioceses expressed their plans to offer marriage rites to same-sex couples through the local option, all citing the affirmations in A Word to the Church.

Among these diocesan leaders was Archbishop Ron Cutler, who said in a Facebook post that he would use his episcopal authority to do so in the Diocese of Nova Scotia and Prince Edward Island. Archbishop Melissa Skelton released a pastoral letter saying that she would authorize the marriage of same-sex couples within the Diocese of New Westminster beginning Aug. 1, subject to certain conditions such as the approval of parish councils. Bishop John Chapman declared in a statement that the Diocese of Ottawa would continue the practice of allowing same-sex marriage with the bishop’s permission.

Of these diocesan statements, perhaps the most significant was that of then-Primate-elect Linda Nicholls. In a statement to the Diocese of Huron, Nicholls authorized marriage to same-sex couples as a pastoral local option starting Aug. 1 in her capacity as diocesan bishop, under certain guidelines. These include stipulations that no parish be required to perform same-sex marriages if it does not wish to do so, and that clergy have the provision by canon to refuse to perform a marriage due to reason of conscience.

“Our church has a wonderful diversity in so many areas of its life,” Nicholls wrote. “That diversity also leads to tensions but I can promise you that the bishops, clergy and laity of our church are committed to living together with love and grace as we continue to learn from one another and seek a path that honors God.”

The first reading of the marriage canon amendment passed at General Synod in 2016 — but only just. The misclassification of a single vote initially led to the body to believe the resolution had failed when, in fact, it had passed.

This story was originally published by the Anglican Journal.

The post What the Anglican Church of Canada’s same-sex marriage vote means for its future appeared first on Episcopal News Service.

This post appeared here first: What the Anglican Church of Canada’s same-sex marriage vote means for its future