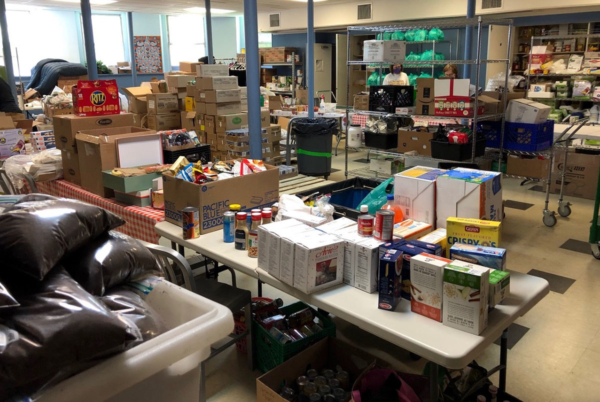 [Episcopal News Service] The economic impact of the coronavirus pandemic is transforming the 38-year-old feeding ministry of one Diocese of Newark congregation. Toni’s Kitchen at St. Luke’s Episcopal Church in Montclair, New Jersey, has quadrupled the number of meals it serves each week, causing the ministry to run far over budget and turning its normally quiet building into a bustling food warehouse.

Before mid-March, when New Jersey residents began to shelter in place and people began losing their jobs or seeing pay cuts, Toni’s Kitchen averaged about 4,000 meals a week. Now, the ministry serves the equivalent of 18,000 meals weekly. The entire 2020 budget of $55,000 for purchasing food and supplies has been spent, but community businesses and residents are answering the ministry’s call for help.

Even before the economic impact of the pandemic, food insecurity was a real but hidden problem in this seemingly well-off New York City suburb. Montclair is one of the richest townships in New Jersey. It is also a study in contrasts.

A block west of St. Luke’s, there are multimillion-dollar homes with views of the Manhattan skyline, about 20 miles east. A block east of the church there is “a completely different world,” Mennell said, with a large immigrant and African American population that struggles to make ends meet.

“God has put us here so we can figure out how to use the resources from those who are willing to share them with those who need them,” he said.

Seventeen percent of students in the Montclair school system receive free or reduced-price meals, Anne Mernin, the executive director of Toni’s Kitchen, told ENS. That figure ought to be closer to 25%, she added, but older students tend not to want to be identified as receiving such assistance.

“There’s a lot of hidden need” in suburbs, and many people presume food insecurity is not an issue, according to Mernin.

In 2017, Essex County, of which Montclair is a part, had the highest percentage of food insecurity of any county in the state. 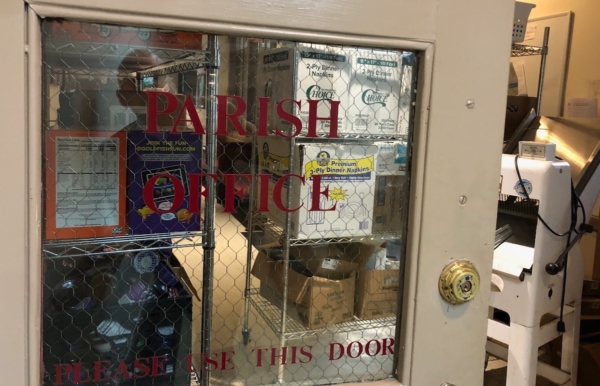 Toni’s Kitchen, was founded in 1982 with a mission “to serve our neighbors in need” and is named after its first cook, Antoinette “Toni” Green.

As Toni’s Kitchen began to respond to the need created by the coronavirus pandemic, St. Luke’s reconfigured its space for food storage and distribution: Every open space on the first floor – the office suite, the conference rooms, the dining room and the hallways – is stacked with food. There are “walls of food, and what’s here changes every single day,” Mennell said as he walked around the building broadcasting via FaceTime.

The church’s parking lot now has two 20-foot leased refrigeration and freezer units, a rented 16-foot truck for food pickups, the church’s van and a van donated by the Montclair Art Museum, as well as a makeshift food distribution site.

Volunteers have always been key to the ministry’s success. They now work in small groups for two-hour shifts between 9 a.m. and 5 p.m. most days. They wear masks, gloves and disposable aprons. A timer rings every 20 minutes to signal a glove change.

Parishioner Michael McDonnell comes in at 6 a.m. several days a week to move stock to where it needs to be before anyone else is there to get in his way. The Fallace family (mom, dad and two sons ages 12 and 8) arrive at 7 a.m. on Sundays to pack bags of food and then head back home to watch St. Luke’s 9 a.m. online worship service.

“It is amazing to see the dedication of so many [who are] willing to put themselves at some risk to serve their neighbors,” Mennell said. “We’ve been transformed so we can serve God’s people, so we can act in love, so we can reach out to our neighbors.”

Setup isn’t the only part of Toni’s Kitchen that runs differently now. Instead of sit-down meals at tables in the dining room four times a week, the homeless and near-homeless people the ministry typically serves line up outside and volunteers bring them bags of ready-to-eat meals, produce and dry goods.

In addition, about 350 food-insecure seniors who live in three low-income public housing facilities receive four ready-to-eat meals and staples each week, the cost subsidized by the township. Kiwanis Club volunteers deliver similar packages to another 150 elderly people living in their own homes.

“Seniors have been very hard-hit by this,” Mernin said. “Even if you have the financial means to shop, you may not have the neighbor or the relative that can go out and do it for you.” The number of seniors needing help, however, has leveled off and is expected to go down over time, she said.

“The number that we would expect to go up is families. The ones we’re seeing right now are the ones that have been living closest to the bone and have the least cushion,” Mernin said. “When they lost their job or they got a significant pay cut, they just didn’t have enough to carry them through.” 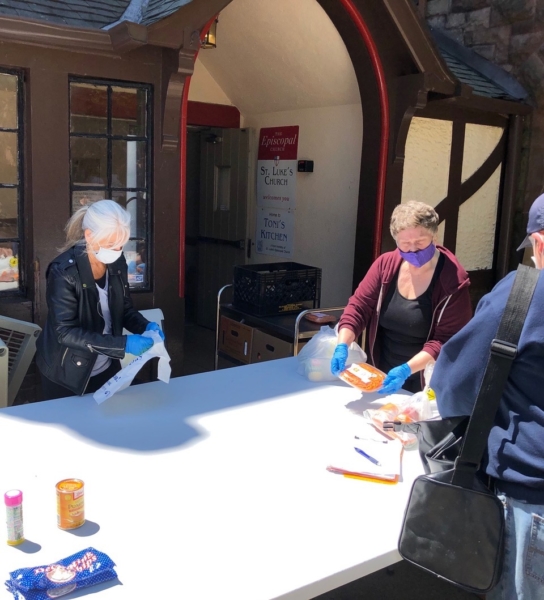 To serve those families, the ministry has expanded its Healthy Backpack Program. The program began as a way to bring healthy shelf-stable food and produce to students and families in the Montclair and neighboring Bloomfield school systems who qualify for free and reduced-price meals at school. The difference now is no questions about income are asked, and that is prompting more immigrant families to come for food.

The need is increasing. On May 1, the Healthy Backpack Program had packages for 80 families, but “they had a line of 200,” Mernin said. For the next distribution, the ministry will have enough food for 250 families.

The Community Food Bank of New Jersey has been a “key partner,” she said. Local Community Supported Agriculture collectives, grocers and markets are donating. The ministry’s advisory committee is contacting distributors and farmers to further diversify its food sources. There are community initiatives to buy food from local restaurants and donate it to Toni’s Kitchen.

“We’re also buying more food than we ever have before, which is why we are so dependent on donations from the broader community,” Mennell said. When Mernin proposed buying $25,000 worth of food the first week, Mennell said, “We both gulped and said, ‘All right, we have that money right now; let’s hope that we can keep doing that.’”

The ministry wants to be flexible enough to take unanticipated donations, such as the 500 gallons of milk that came in the first week in May. Sometimes the food is close to its spoilage date, but donors know that Toni’s Kitchen can quickly distribute the food, Mernin said.

More than 1,000 individual donors made financial contributions in the past two months. In the past month, donors have given $80,000 to a matching fund of the same amount set up by the Partners for Health Foundation, the Schumann Fund for New Jersey, the Montclair Fund for Women and the Town of Montclair.

Toni’s Kitchen is in it for the long haul, Mernin and Mennell both said.

The post Toni’s Kitchen expands with faith in God’s call to love and with help from partners appeared first on Episcopal News Service.

This post appeared here first: Toni’s Kitchen expands with faith in God’s call to love and with help from partners