[Episcopal News Service] He may have preached at a royal wedding, but he’s never committed himself to answering whatever questions the users of the social network Reddit might throw at him – until now.

Presiding Bishop Michael Curry spent the afternoon of Oct. 10 participating in his first “Ask Me Anything,” a popular Reddit feature that goes by the shorthand AMA. The idea behind the AMA session is for a person of some renown or import – from Bill Gates to a local TV weatherman – to mingle with the average Reddit user and take any and all questions. Curry’s AMA can be found on the r/Christianity subreddit. 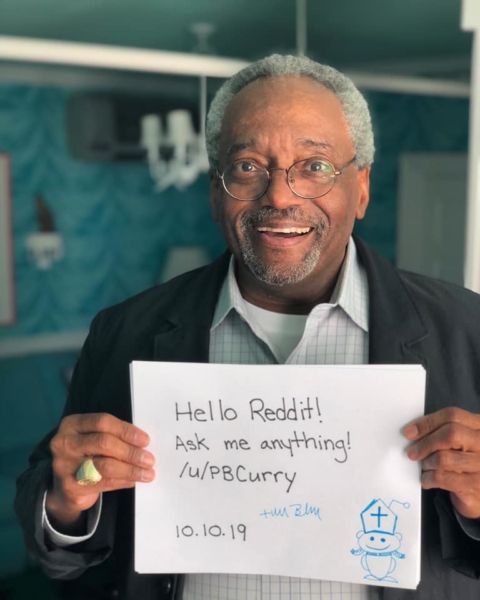 Presiding Bishop Michael Curry holds a sign promoting his Oct. 10 “Ask Me Anything” session on the social network Reddit.

“Looking forward to talking all things Episcopal Church, The Way of Love, Jesus Movement, and perhaps a little bit about that wedding,” Curry said in his introduction.

Attached was a photo of Curry holding a sign that read, “Hello Reddit!” In the corner of the sign was a hand-drawn depiction of Reddit’s alien mascot, Snoo, dressed in bishop garb.

Over about an hour and a half, the session generated 145 comments between Curry and his questioners. The questions touched on topics that included evangelism, devotional practices, preaching style, theological education, the Episcopal tradition and denominational decline.

“I find it helpful to remember that we are first of all not a religious institution. That we are first of all participants in the movement that Jesus began in the first century,” Curry said. “And that movement of Jesus – a movement of people that gathered around him and his movement of love – that movement has been an underground movement in the first century. … It may well be now that we have returned to being an underground movement again. And that’s okay, because our way is not the way of the world. It is the way of the crucified and risen One.”

The “Ask Me Anything” coincided with the release of new episodes in the second season of The Episcopal Church’s “Way of Love” podcast featuring Curry, according to Jeremy Tackett, Episcopal Church digital evangelist.

“We’ve been working for the past few months to find an opportunity for the presiding bishop to interact with the Reddit /r/Christianity community,” Tackett told Episcopal News Service. “They’re an active group, and we knew there would be great questions and a chance to reach beyond our normal Episcopalian audience.”

Some Reddit users asked Curry about his own spiritual growth.

“How has your relationship with Jesus changed over the years?” asked a user who goes by Ay_Theos_Meo. “How is your spiritual life different from your early days as Christian (if it is different at all)?”

“I have to admit that one of the things that really has changed is that Jesus really has a way of broadening my worldview and perspective rather than constricting and limiting it,” Curry responded, in part.

Another user asked whom Curry would like to meet to discuss faith. “Of course the answer is Jesus,” Curry said. He also added German theologian Dietrich Bonhoeffer and Fannie Lou Hamer, a leader in the civil rights movement.

Other questions were more lighthearted, and Curry was willing to play along.

And at a few points the “Ask Me Anything” session turned personal. One user mentioned being baptized and confirmed by Curry when he was bishop of the Diocese of North Carolina. Another Reddit user, Tepid_Radical_Reform, told Curry that many years ago Curry’s wife worked with the user’s mother at a bank in Cincinnati, and the mother also baby-sat Curry’s daughter.

“I do,” Curry responded. “Especially when I’m not dieting!’