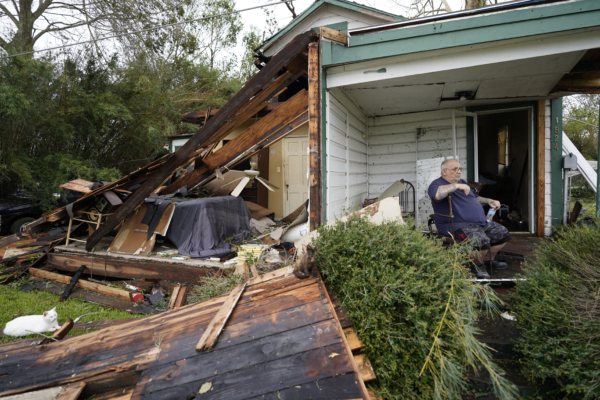 Chris Johnson views destruction at his home on Aug. 27 in Lake Charles, Louisiana, after Hurricane Laura moved through the state. Johnson stayed in his home as the storm passed. Photo: Associated Press

“This is a powerful, life-threatening storm. If you’re in the southwest, please heed the governor’s warning and evacuate,” Western Louisiana Bishop Jacob Owensby said in a Facebook post Aug. 26 as the hurricane was approaching.

The eyewall of #Laura is moving onshore over southwestern LA. TAKE COVER NOW! Treat these imminent extreme winds as if a tornado was approaching. Move immediately to a safe room in your shelter. Take action now to protect your life!

“Know that it’s just you and God,” Mayor Thurman Bartie of Port Arthur, Texas, warned residents who stayed behind to wait out Hurricane Laura.

Officials said the police and emergency workers would not be able to reach anyone until the storm had passed.https://t.co/iaEMYzIv9r pic.twitter.com/9hKG6OHQiv

The diocese is based the central Louisiana city of Pineville, and Laura, though weakening as it moved north, it was still packing hurricane-force winds of 75 mph as of late morning Aug. 27, according to the National Hurricane Center. Owensby posted photos showing a pine tree felled by the wind outside his home in Alexandria.

Four Episcopal churches are located in and around Lake Charles, Louisiana, an inland waterway city about 30 miles from the Gulf Coast where Laura made landfall with winds of up to 150 mph and what forecasters described as a “catastrophic storm surge.”

“Dear ones, I pray that all of you are well and you made it through the storm safely,” the Rev. Margaret Lovejoy said in a post to the St. Andrew’s Episcopal Church Facebook page. She reported evacuating with her family to Waco, Texas. Of those who remained in Lake. Charles, she asked if any were available to check on the church, just north of the city in Moss Bluff.

A large chemical fire was reported Aug. 27 at a plant in Lake Charles. The region is an oil industry hub, and refineries there reportedly shut down or reduced capacity in advanced of the storm.

The Rev. Seth Donald, rector of St. Michael and All Angels Episcopal Church, left Lake Charles with his family to stay in Shreveport, in the state’s northwest corner, during the storm. On Aug. 26, outside St. Mark’s Cathedral in Shreveport, Donald addressed his congregation in a Facebook livestream to offer his support while encouraging parishioners to follow evacuation orders.

“This is a great time to remember that our priory is on the value of human life and not our possessions,” Donald said.

At noon Aug. 27, Laura was downgraded to a tropical storm, with maximum winds of 70 p.m. At that time, it was centered about 50 miles east of Shreveport. Another storm, Marco, made landfall near the mouth of the Mississippi River on Aug. 24, but as a tropical storm it posed much less of a threat. This hurricane season could end up one of the most active on record, according to forecasters.

Here's the latest on what we can expect through the rest of today from Hurricane Laura.

While Laura is continuing to weaken, as it moves farther inland, minor to moderate impacts will still be possible through the remainder of today.#lawx #mswx

Friends, pray with me especially for the safety of those for whom evacuation is difficult or impossible; especially with shelters so limited because of COVID.
If you are in Laura’s path, this site is a great resource. https://t.co/9cGIGnkH1Q

Just across the state line, in Beaumont, Texas, St. Stephen’s Episcopal Church leaders were reaching out to members on Aug. 27 to check on their conditions after the hurricane and assess their and the community’s needs.

“Let us give thanks that Beaumont was largely spared from the worst of Hurricane Laura, praise be to God,” the church said on Facebook. “Just as Beaumont fared well, it is because the storm moved east and hit our friends and family in Louisiana even harder,” the post said, and it encouraged followers to donate to Episcopal Relief & Development to support recovery efforts.

We pray for the safety of everyone in Laura’s path. We rejoice in what good news shines through and remember that even after returning home, hurricane recovery is long and difficult. As a church, our calling is to help those in need to rebuild their homes and lives. https://t.co/0aR1D54hcx