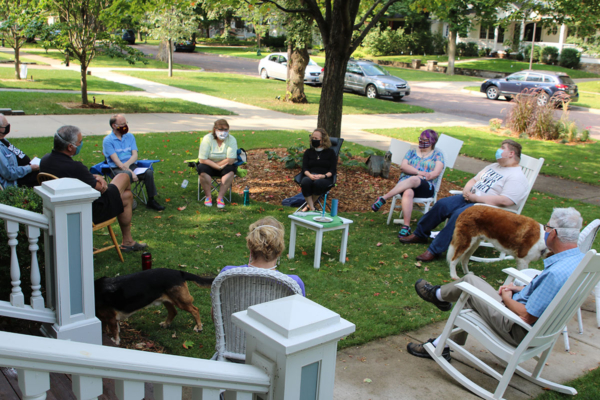 [Episcopal News Service] For three Sundays this summer, the backyard of Charles Taylor’s home in Washington, D.C., offered more than a place for peaceful relaxation. It became a place of worship. Home is where the church is.

Taylor and his wife have hosted a “garden group” of parishioners from St. Columba’s Episcopal Church on Sundays deemed convenient and environmentally appropriate, most recently on Aug. 23. “Basically, we’ve been trying to look for days when the weather wasn’t too hot or too wet,” Taylor told Episcopal News Service.

About 10 people arrange themselves in the backyard a safe distance apart. Wearing masks, they read from a customized order of service bulletin produced by St. Columba’s for house churches like this.

“It becomes more like what one imagines early Christian meetings were like,” Taylor said. “It’s not the same [as attending in a church], but the smallness of it is actually very welcome.”

Similar Sunday scenes are taking place in Minneapolis, Minnesota, among a group of parishioners from St. John’s Episcopal Church. They gather for worship most Sundays in the front yard of John Bellaimey and Lynnell Mickelsen. The congregation first organized these and other similar gatherings as small, in-person watch parties for the church’s Sunday service. Each week, the church posts a video online of Holy Eucharist through the Liturgy of the Word.

Now some groups lead their own worship, reading out loud parts of the liturgy from the St. John’s service and incorporating video of the rector’s sermon and other prerecorded components when appropriate. The rector, the Rev. Lisa Wiens Heinsohn, often is among the 10 to 15 people who attend – as a fellow worshipper, not to preside at Holy Eucharist.

Heinsohn is reluctant to celebrate Communion in this setting, though she senses the Holy Spirit at work.

“Everybody brings their own chair and everybody wears a mask, but there is this feeling of being present even with a small group of people,” she said in an interview with ENS. It is one example of the pandemic’s silver lining: “We’re just experimenting with different things, Heinsohn said. “Innovation is just happening every day.”

Much of the churchwide innovation this year is shaping virtual worship, which has taken off in ways that no one could have imagined before the coronavirus took hold in mid-March and forced the suspension of most in-person worship. Online services continue to be a mainstay of Episcopal worship heading into the fall, though some congregations have begun holding outdoor services and, more rarely, small services indoors. Masks, use of sanitizer and at least six feet of separation are standard requirements for participation.

This summer, The Episcopal Church also launched a series of online resources to help Episcopalians start small group ministries, particularly focused on discipleship and formation and easily administered online through conferencing tools like Zoom. Examples of house churches are less common across the church, but some Episcopalians have found a liturgical oasis in these natural, communal settings, like the Washington backyard and Minneapolis front lawn.

“They want to connect with each other and with God, and there is just something intangible and wonderful about seeing each other in person,” Heinsohn said. 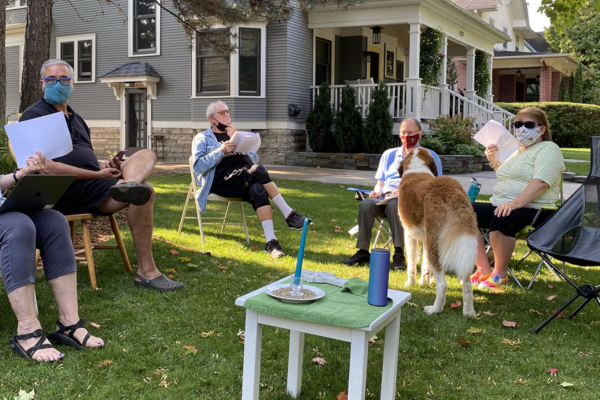 St. John’s invites its parishioners to sign up for an in-person watch party for its Sunday online services, so organizers and hosts know how many will attend. If a large number of people are interested, they may break into multiple gatherings, but often there is just one group. Participants gather around a screen to watch the service, which is followed by discussion and fellowship.

The congregation also hosts an online watch party through Zoom, so parishioners can share each other’s presence while remaining in their own homes.

About 200 people typically attended services at St. John’s before the pandemic. The church is small and doesn’t have a lot of outdoor space, which has made it difficult to predict when the congregation will be able to return to some form of worship at the church, Heinsohn said. In the meantime, the watch parties offer an in-person option that can accommodate everyone who signs up, as long as some are willing to host at their homes. 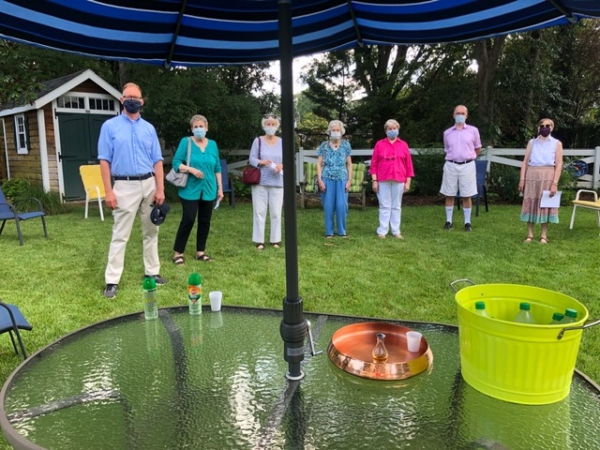 The Communion elements are set up on a table in Charles Taylor’s backyard for one of the “house church” services arrange by St. Columba’s Episcopal Church in Washington, D.C. Photo: Charles Taylor

Even at home, such services need to follow precautions intended to slow the spread of COVID-19. During the services in Taylor’s backyard, there are no hymns because of the transmission risk posed by singing. Eucharist is celebrated, though with limited personal contact. The Communion elements are consecrated the previous Thursday by a priest at St. Columba’s and brought on Sunday by a parishioner who has been trained as a Eucharistic visitor. Consecrated wafers and wine are put into paper cups for participants to receive by picking them up from a table in the Taylors’ yard.

Taylor, 70, is a native of Great Britain, a retired economist and a regular churchgoer. He and his wife have been pleased with how church leaders have kept the congregation connected online, though they miss attending church in person at St. Columba’s and seeing other parishioners.

“This fills a little bit of a gap,” he said, though he acknowledged that Zoom meetings offer at least one advantage: You can see each other’s faces. “When you meet in the garden, you don’t, because they’re wearing masks.”

The plan for the St. Columba’s house churches was developed by the Rev. Joshua Daniel, associate rector for discipleship and worship.

“The idea came in trying to think about, what’s the best entry level for in-person worship?” Daniel said in an interview with ENS. To bring the congregation back for worship inside the church was “logistically complicated and not particularly safe.”

As the congregation expanded its digital offerings during the pandemic, church leaders also began thinking about new ways of worshipping in person. Gathering outdoors is presumed to be safer than indoors, less likely to enable the coronavirus to spread rapidly, and by using a backyard, group size would be limited. Daniel also was inspired to expand on the brief encounters parishioners have with each other during traditional church services, such as at the peace.

In a church setting, “those interactions can only be so personal,” he said. In small group worship, personal encounters become the main event.

“Hopefully, there will be opportunities to get to know each other in a much more in-depth way, but also to pray with one another in a way that large corporate worship on Sunday just doesn’t afford because of how many people there are.”

To get the house churches off the ground, church leaders asked for volunteer hosts, parishioners with big backyards or nearby public parks. Initially, the services just followed the Liturgy of the Word. Daniel sought to enlist Eucharistic visitors because that role is detailed in the Canons of The Episcopal Church: to serve “members of the congregation who, by reason of illness or infirmity, were unable to be present at the Celebration.”

The Episcopal Church of the Epiphany in Richardson, Texas, also is overseeing home church worship led by Eucharistic visitors. The congregation in the Diocese of Dallas conferred with Bishop George Sumner to ensure it was following his guidelines for worship during the pandemic, but in this case, house church is not a communal service but simply a family worshipping together.

Parishioners are trained as Eucharistic visitors so they can worship with their own families at home and receive Communion. “This is certainly not a drive-by Communion,” the Rev. Betsy Randall, the church’s rector, told ENS.

The response has been encouraging, Randall said. For the 20 or so families who began participating this summer, it offers opportunities for family-based discipleship and spiritual growth despite the challenges posed by the pandemic. 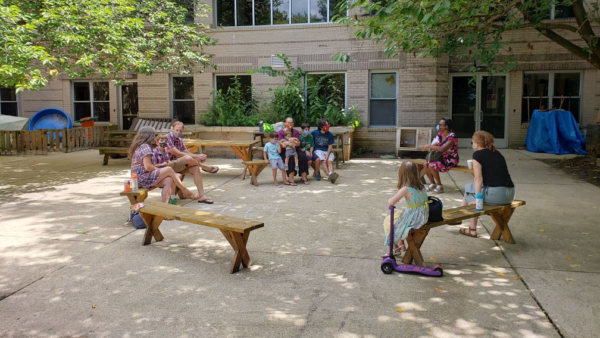 In Washington, several groups of St. Columba’s parishioners have gathered for intimate worship services in various settings this summer. One group chose to meet frequently in the courtyard at the church, though church members haven’t yet adopted the practice broadly, Daniel said.

“We had hoped for it to be kind of small this summer so we could test out these thigs and find some best practices,” he said. More groups will be encouraged to form this fall.

The typical Sunday attendance at St. Columba’s in pre-COVID-19 times was about 600 worshipers. Some parishioners may be reluctant to gather even in a limited way while the coronavirus is still spreading. After the first spike in cases began to subside in late spring, “no one was breaking down the doors to have in-person worship on Sundays,” Daniel said.

The response was similar in the Diocese of San Diego when Christian Gillette began encouraging house churches. The concept hasn’t yet been adopted by worshippers there, as California looks to stabilize after a summer surge in new COVID-19 cases, which had averaged more than 5,000 a day for two months.

“A lot of people are still nervous to gather in person,” Gillette told ENS in late August. As the diocese’s canon for evangelism and discipleship, he has been working with some churches to launch small group ministries, but in general, “everyone’s still kind of wanting to stay online.”

Gillette also thinks some Episcopalians are apprehensive about the house church setting because they don’t want it to replace traditional worship in a church, though he hopes that some in the diocese will give at-home worship a try this fall. He posted written resources online to assist groups of up to 10 with planning such gatherings. Early Christians’ home-based gatherings “were the primary way in which people came to faith and gathered to worship,” Gillette noted in the online post. “The number of people who would gather was limited to how many people could fit inside the space of residence.”

Like Daniel at St. Columba’s, Gillette expects trained Eucharistic visitors to safely help Episcopalians receive Communion in small groups. It may not be worshippers’ preferred setting, but for now Gillette sees it as one of the few opportunities to gather in person for worship at a time when large indoor gatherings are not yet possible – and may not be for some time.

“People miss community. They’re missing the Eucharist, and I imagine that people will be more willing if they feel safer to try new things, to have that experience with their community,” he said.

When the pandemic diminishes and St. Columba’s reopens for regular worship, Taylor thinks it will be a great relief, but his garden group might continue to meet now and then. Small group worship can be a worthwhile experience in normal times in as well.

“I have to say, there’s something nice being in the open air, hearing bird sounds in the background, a little wind, the flowers in the garden and praying,” Taylor said. “There’s a group of Christians coming together. It is a lovely experience.”