For an Epiphany blessing, chalk the door with ‘holy graffiti’ 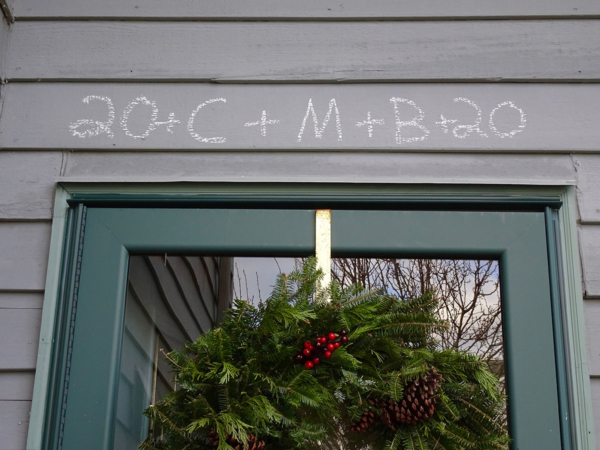 The combination of numbers, letters and symbols involved in chalking the door evoke the year, the cross and the traditional names of the kings: Caspar, Melchior and Balthazar. The letters are also an abbreviation for “Christus Mansionem Benedicat,” which means “May Christ bless this dwelling.” Photo: Mary Frances Schjonberg/Episcopal News Service

[Episcopal News Service] From the Epiphany and continuing for days to come, more and more Episcopalians are joining other Christians around the world in writing this ancient yet ever-changing formula on their doors: 20+C+M+B+20

The numbers, letters and symbols have been called “holy graffiti” and some people suggest their combination looks like the start of an algebraic equation.

The letters C, M, B come from the traditional names for the three wise men: Caspar, Melchior, and Balthazar, whose arrival at Mary and Joseph’s home is celebrated on the Epiphany. The letters are also an abbreviation for “Christus Mansionem Benedicat,” which means “May Christ bless this dwelling” The first and last numbers refer to the current year. The plus signs in between represent the cross. 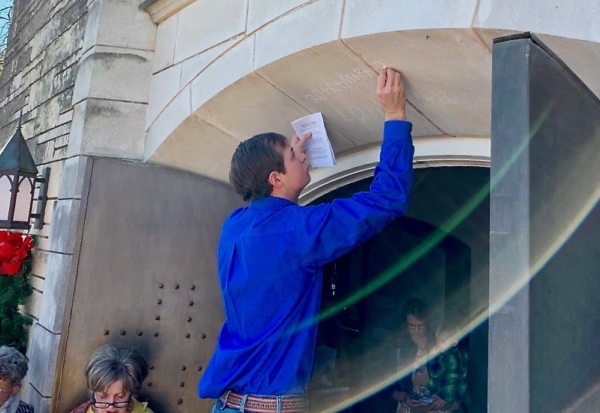 “Chalking the door,” as it is known, is seen as invoking Christ’s blessing not only on the physical house but on the people who live there and those who visit. There is a long tradition of blessing homes, especially on the Epiphany, which falls on Jan. 6 each year, and the weeks that follow. Europeans have chalked their door as part of Epiphany house blessings for centuries, especially Roman Catholics. The practice has become popular in the United States only relatively recently. Chalking can be done simply with a short prayer or with songs, prayers, processions, incense and holy water. Clergy or lay people can do the chalking. 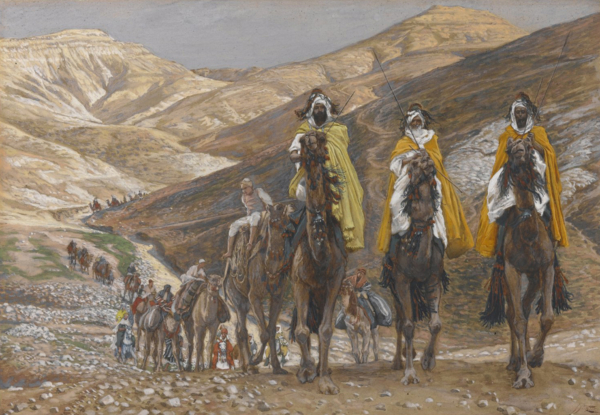 The tradition of chalking the door evokes the visit of the three wise men, or the Magi, to the Holy Family’s home. Photo: The Magi Journeying by James Tissot Brooklyn Museum via Wikimedia Commons

The Episcopal Church recognized the practice two years ago. Its Book of Occasional Services historically has contained a liturgy for blessing each room of a house, along with a shorter Epiphany house blessing. When the Standing Commission on Liturgy and Music revised the book in 2018, the editors included chalking the door for the first time. They wanted to respect how the tradition had caught on among individual Episcopalians and their congregations, according to the Rev. Paul Fromberg, a member of the commission. (The blessing is found on page 167 here.)

The Rev. Mike Marsh, rector of St. Philip’s Episcopal Church in Uvlade, Texas, told Episcopal News Service that he is glad the tradition is spreading.

“Given what’s going on in our country and in our world today, we need homes of refuge, whether you are a church member or not,” he said.

Marsh, who annually writes about the tradition on his “Interrupting the Silence” blog, blessed about 80 pieces of chalk during the Jan. 5 Sunday Eucharist so that parishioners could take some home to chalk their doors. They will use a copy of the prayer he suggests.  The parish also keeps some chalk for its neighbors who often come asking about the practice after they see the symbols on their friends’ homes.

“We’re all Magi, visitors bearing gifts to other people’s home, and we’re all the Holy Family who received the visitors,” Marsh said. “The chalk reminds of us that. It’s a reminder that this is a home of refuge, it’s a home of love, it’s a home of Christ for you to come into. And, it’s not only for the guests who come into our homes; it’s a reminder to us when we come home that we have a home, that we have a refuge.”

As Epiphany and the days beyond it come and go, he said, the chalk fades, but the blessing remains.

“If all we do is chalk the doors and then it goes away, we haven’t done much,” Marsh said. “It needs to go into the home and into our hearts.”

The tradition’s origins are obscure but the practice has its echoes in the story of the Israelite exiles in Egypt marking their doors with lamb’s blood so that the angel of the Lord will pass over their homes when it comes to kill the firstborn of Egypt. In Deuteronomy, the Israelites are told to write God’s words on their hearts, their gates and the doorposts of their houses, and to talk about them when they are at home.

Diocese of Central Pennsylvania Bishop Audrey Scanlan and her husband, Glenn, chalk the inside lintel of their front door so that the formula is a reminder to take their faith out into the world. Yet, she added, the “Christus Mansionem Benedicat” abbreviation “is really about an internal blessing not a blessing of sending.” 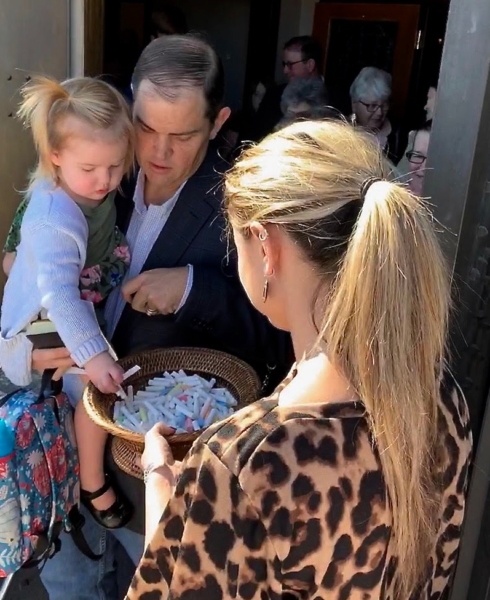 Scanlan likened the chalked symbolism to the mezuzah, the small case on the right outside doorpost of Jewish homes containing a scroll which typically is inscribed with Deuteronomy 6:4–9 and 11:13–21. The verses tell of God’s covenant with Jews to protect them and help them flourish if they keep God’s law. They instruct Jews to write the words of the covenant on their doorposts as a reminder to them when they enter or leave a home.

Both the mezuzah and the door chalking are “a totem to remind us, coming and going, of our faith,” said Scanlan, who wrote about why her family chalks their door in a 2017 blog post.

She first experienced chalking the door at Trinity Episcopal Church in Collinsville, Connecticut, the parish that sponsored her for ordination in the early 2000s. Her family has practiced it ever since. “One of the things that I’ve always coveted about other faith traditions is the prayer and expression of faith in the home,” she told ENS, adding that Episcopalians do not always explore the daily practice of faith. “I love the idea of bringing faith into the home,” she said.

At some times and in some places, chalking the door has also been a far more public declaration of faith and refuge. It is said that in the years of Soviet dominance of Eastern Europe, the practice defied state-imposed atheism.

Marsh likes to link chalking the door to another Epiphany tradition: the ancient church’s practice of announcing the dates of Easter as well as other major feasts and fasts which, unlike Christmas and the Epiphany, do not have a fixed date. They are Ash Wednesday; the Triduum of Good Friday, Holy Saturday and Easter; the Ascension; Pentecost and the First Sunday of Advent. Marsh has copies of the proclamation for people to take, along with their chalk and blessing prayers.

The so-called Easter Proclamation, he recently wrote, is about more than dates.

“Ultimately, it proclaims the reality that our lives are to be lived in rhythm with and according to Jesus’ life,” he said.

The post For an Epiphany blessing, chalk the door with ‘holy graffiti’ appeared first on Episcopal News Service.

This post appeared here first: For an Epiphany blessing, chalk the door with ‘holy graffiti’