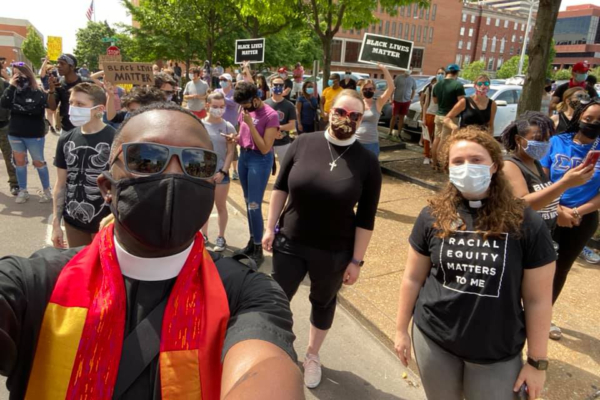 Missouri Bishop-elect Deon Johnson, in a photo posted to Facebook, joins a group of Episcopalians in participating in a racial justice protest May 30 in St. Louis County.

[Episcopal News Service] Episcopalians and leaders across The Episcopal Church are amplifying the church’s call for an end to racial injustice as they join some of the vigils and demonstrations that have become widespread across the country in response to the death of George Floyd at the hands of police in Minneapolis, Minnesota.

Floyd, an unarmed black man, died May 25 after being pinned to the ground for several minutes by a Minneapolis officer with his knee on Floyd’s neck. The officer was fired and has been charged with third-degree murder and manslaughter. Video of the incident, including Floyd’s last words, “I can’t breathe,” sparked outrage and protests last week in Minnesota’s Twin Cities before spreading to dozens of cities in other states.

Episcopal leaders in Minnesota have expressed anger at Floyd’s killing and have joined peaceful protests there. They are leading online vigils and attending in-person tributes to Floyd. They are helping their neighbors and neighboring business owners clean up after vandalism, looting and fires caused by some demonstrators.

“We are so grateful for the ways in which clergy and lay leaders have been bearing witness to the love of Jesus in these painful days for the people of the Twin Cities, the rest of Minnesota, and indeed our whole nation,” Minnesota Bishop Brian Prior and Bishop-elect Craig Loya said in a May 30 Facebook post. “Your prayers and presence are sending the clear message that the church, like the savior we proclaim, always stands on the side of the marginalized.” 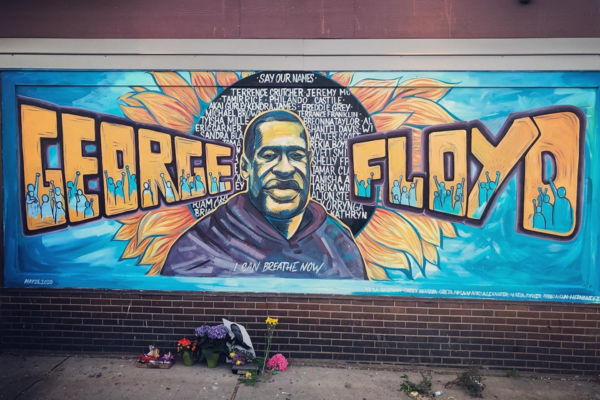 A mural memorializing George Floyd and other black victims of police violence is displayed near the site in Minneapolis where Floyd died May 25 while being taken into police custody. Photo: Paul Lebens-Englund

Church leaders also are decrying the systemic racism that they say connects Floyd’s death to a growing number of high-profile cases of deadly violence against people of color by police or by white vigilantes. The most recent such cases include Ahmaud Arbery, a black jogger killed in February by two white men, a father and son, in Glynn County, Georgia, and Breonna Taylor, a black woman who was shot and killed in March by police during a raid of her home in Louisville, Kentucky.

Presiding Bishop Michael Curry referenced those two earlier killings in his May 30 message to the church, in which he tied the collective pain of such violence to its historic and unrelenting presence within “the fabric of American life.”

“But we need not be paralyzed by our past or our present,” Curry said. “We are not slaves to fate but people of faith. Our long-term commitment to racial justice and reconciliation is embedded in our identity as baptized followers of Jesus. … That work of racial reconciliation and justice – what we know as Becoming Beloved Community – is happening across our Episcopal Church.”

“Our long-term commitment to racial justice and reconciliation is embedded in our identity as baptized followers of Jesus. We will still be doing it when the news cameras are long gone.” @PB_Curry's Word to the Church: https://t.co/pwmraswFLo@iamepiscopalian @episcopal_news pic.twitter.com/cRRmSntu8k

The church launched its Becoming Beloved Community framework in 2017 as a resource for deepening conversations about the church’s historic complicity with slavery, segregation and racism. It aims to enlist all Episcopalians in the work of racial healing. The framework is broken into four parts that are illustrated as a labyrinth: telling the truth about our churches and race, proclaiming the dream of Beloved Community, practicing the way of love in the pattern of Jesus and repairing the breach in society.

The Episcopal Church in Minnesota has provided resources for its own congregations and parishioners to engage in conversations centered on Becoming Beloved Community. And in January 2018, church leaders relocated diocesan offices to a building in a historical black neighborhood on the north side of Minneapolis, which it saw as a better fit for the church’s ministry.

“We believe this focusing on being in relationship and partnership with our community is how we live into the way of love,” Rachel Babbitt, missioner for community engagement, said in an email to Episcopal News Service. In the wake of the Floyd killing, the Episcopal Church in Minnesota is supporting community organizations that are collecting donations and lining up volunteers to clean up the neighborhood, including the sites of two nearby arsons.

One of the leading churchwide agencies supporting Becoming Beloved Community is the Absalom Jones Center for Racial Healing, a ministry of The Episcopal Church and the Diocese of Atlanta. Bishop Robert Wright is scheduled to join a panel discussion at 4 p.m. EDT June 2 for the final webinar in the center’s three-part series, “A Cry to God Together.”

“From the founding of our country we have had a white supremacy problem,” Wright said in a written statement released May 30 in response to the Floyd killing. “What looks like the behavior of a few bad actors is actually a system producing what it was designed to produce, the denial of dignity and safety to black and brown people, specifically black men.”

Other Episcopal bishops have spoken out in recent days, with their own statements and in some cases by joining public protests, calling on Episcopalians to fight against racism embedded in American institutions. At the same time, church leaders have navigated the challenge of public advocacy at a time when the coronavirus continues to spread in communities around the country.

“George Floyd’s name joins a litany of people of color who have suffered abuse and been murdered simply because of their skin tone. In light of such atrocities and unholy acts, we join our voices to speak together,” Colorado Bishop Kym Lucas said in a joint statement released May 30 with her Colorado counterparts in the Evangelical Lutheran Church in America and the United Methodist Church.

Violence against people of color at the hands of those in power “is unacceptable and contrary to the will of God and the promise of justice and freedom central to our country’s ideals,” Connecticut Bishop Ian Douglas and Bishop Suffragan Laura Ahrens said in a May 28 statement. “Silence is complicity and we must not participate in the forces of evil that divide us.”

Douglas also was among the religious leaders who on May 29 spoke up about racism during an event held by Gov. Ned Lamont to announce easing of restrictions intended to slow spread of the coronavirus. Douglas seconded a point made by another faith leader “making the connection between those who suffer at the hands of racism and white supremacy in our nation and those who suffer from the realities of COVID-19.”

COVID-19, the disease caused by the coronavirus, has disproportionally affected people of color in the United States.

Long Island Bishop Lawrence Provenzano, in his written statement, also alluded to a disproportionate police response that people of color often face in exercising their First Amendment rights compared to white citizens, such as those who recent protested states stay-at-home orders.

“White supremacy promotes a second set of standards on how the population is treated differently in so many instances by the police, at the direction of policy makers,” Provenzano said. “A group of armed white men can surround a state capitol and threaten citizens with almost no negative consequences. But black and brown unarmed people protesting the murder of an unarmed black man by police are met with tear gas and the violence of police in riot gear.”

Maryland Bishop Eugene Sutton initiated a 17-minute video conversation with Ford Rowan, an Episcopalian from Annapolis and former journalist, to discuss “the psychological ramifications of the legacy of slavery and racism and what we can do about them.” The video of their conversation was posted May 31 on YouTube.

And in Iowa, Bishop Alan Scarfe spoke about racism May 31 during his Pentecost sermon on Facebook and then attended an evening vigil for George Floyd in Des Moines’ Union Park.

In addition to Curry’s message to the church, the presiding bishop wrote an opinion article that was published May 31 by the Washington Post.

“Love does not look like one man’s knee on another man’s neck, crushing the God-given life out of him,” Curry wrote. “Love does not look like the harm being caused by some police or some protesters in our cities. … When I think about what love looks like, I see us channeling our holy rage into concrete, productive and powerful action.”

Curry, who in 2015 became the first African American elected to lead The Episcopal Church, also preached during the Pentecost service offered online by Washington National Cathedral. Video of the 19-minute sermon is posted on Curry’s Facebook page. He followed that June 1 by appearing on NBC’s “Today Show.”

The Rev. Stephanie Spellers, the presiding bishop’s canon for evangelism, reconciliation and stewardship of creation, spent much of last week helping to coordinate The Episcopal Church’s response to Floyd’s killing. On May 30, wearing a white clergy color and a “peace and love”  bandana as a mask, she joined a procession of peaceful protesters in New York who marched from Harlem to Trump Tower on Manhattan’s Fifth Avenue.

“Praying and moving, because I couldn’t just sit there anymore,” Spellers said in a video she posted to her Facebook page. “Wherever you are, resist. Wherever you are, pray. Wherever you are, give thanks that we still have this breath in our lungs, a breath that George Floyd no longer has. Use that breath and that life to make things right.”

Indianapolis Bishop Jennifer Baskerville-Burrows, who was consecrated in 2017 as the first black woman to serve as a diocesan bishop, joined a racial justice procession in Indiana’s capital city on May 31. “Speak out, stand up, may justice roll down,” she said on Facebook.

And Georgia Bishop Frank Logue, just a day after his consecration, was out May 31 with protesters in Savannah wearing bishop’s purple and a multicolored face mask. His post on Facebook said clergy were asked by Savannah’s mayor to join the protest against police violence. Episcopal clergy who joined the protest attended a training earlier in the day on de-escalating violence, Logue said.

Missouri Bishop-elect Deon Johnson, who is scheduled to be consecrated on June 13, wore a black face mask to join other Episcopalians in attending a peaceful protest in St. Louis County on May 30.

“The sin of racism has no place in our society any longer. As you can see it’s a peaceful protest people gathering to say things in our society need to change,” Johnson told KTVI-TV.