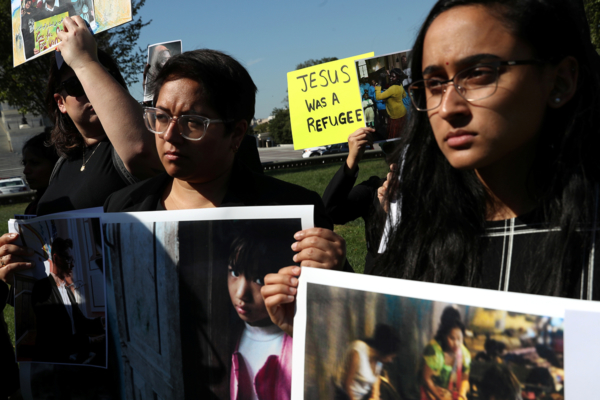 People protest against Trump administration cuts to the U.S. refugee resettlement program, in front of the U.S. Capitol Building in Washington in October 2019. Photo: Reuters

[Episcopal News Service] The Episcopal Church and its refugee resettlement affiliates in Texas have condemned Gov. Greg Abbott’s recently announced decision to block resettlement of refugees in the state as the Trump administration steps up its efforts to hollow out the federal government’s 40-year-old resettlement program.

President Donald Trump ordered a new rule this year that makes refugee resettlement conditional on local consent, allowing states and municipalities to opt out of receiving refugees in their communities. More than 40 governors, of both parties, have consented or said they would consent to continuing the program in their states, but Abbott, a Republican, announced Jan. 10 that he would end refugee resettlement in Texas.

“Texas has carried more than its share in assisting the refugee resettlement process,” Abbott said in his letter to the State Department informing it of his decision. “Texas has been left by Congress to deal with disproportionate migration issues resulting from a broken federal immigration system.”

Episcopal Migration Ministries, or EMM, is one of nine agencies with federal contracts to resettle refugees in the United States. Of the 13 affiliates around the country that partner with EMM to conduct that work, two are in Texas: Refugee Services of Texas in Austin and Interfaith Ministries for Greater Houston, both in the Diocese of Texas.

They and other agencies that resettle refugees in Texas are calling on Abbott to reverse his decision before the policy takes effect on June 1.

“Texas has been a leader in providing safety, fresh starts and open hearts for thousands of the world’s most vulnerable children, mothers and fathers since the U.S. refugee resettlement program began,” Refugee Services of Texas CEO Russell Smith said in a written statement. “We stand with thousands of Texas employers who hire refugees, partner organizations, faith-based groups, such as churches, and the most loyal, committed and devoted volunteers in the nation who are deeply hurt by the Governor’s decision.”

The Episcopal Church issued a statement on Jan. 11 affirming its commitment to refugees and the agencies in Texas that assist them.

“Texans have long been known for their southern hospitality and generosity of spirit,” the church said in its statement. “Additionally, many Texans are people of strong faith who take seriously the Gospel call to welcome the stranger and to help those who are fleeing religious persecution and violence. The Episcopal community in Texas shares these values.”

EMM has resettled nearly 100,000 refugees since the 1980s, providing a range of services for these families upon their arrival in the United States, including English language and cultural orientation classes, employment services, school enrollment and initial assistance with housing and transportation.

“We stand with our faith and community partners in opposition to this decision,” EMM communications manager Kendall Martin said by email. “We remain committed to uplifting new Americans and standing for welcome.”

In addition to requiring local consent, the Trump administration limited the number of refugees to be resettled in this fiscal year to 18,000, a historic low and a sharp reduction from the 30,000 who were resettled in the United States in the previous year. For most of the past two decades, that cap had remained between 70,000 and 90,000, and President Obama raised it to 110,000 during his final year in office.

The uncertainty caused by the dramatic shift in refugee policy under Trump has challenged the operations of EMM and the other eight resettlement agencies, which include Church World Service, International Rescue Committee and the U.S. Conference of Catholic Bishops. This year, they have been granted contract extensions only until June, Martin said. Then, the State Department may decide to renew all nine contracts, or it may end its work with some of the resettlement agencies.

Whatever happens to the agencies’ contracts, refugee resettlement is poised to end in Texas. Interfaith Ministries for Greater Houston said on its Facebook page it was “very disappointed” by Abbott’s decision, and the agency vowed to press the governor to reconsider.

The changes to the refugee resettlement program are the latest developments in the Trump administration’s ongoing effort to limit and reduce both legal and illegal immigration into the United States, a policy platform that was a central part of his 2016 campaign.

Smith, the Refugee Services of Texas CEO, noted in his statement that Abbott was adding to the “ongoing confusion between illegal immigration and border security and the American refugee resettlement program.” 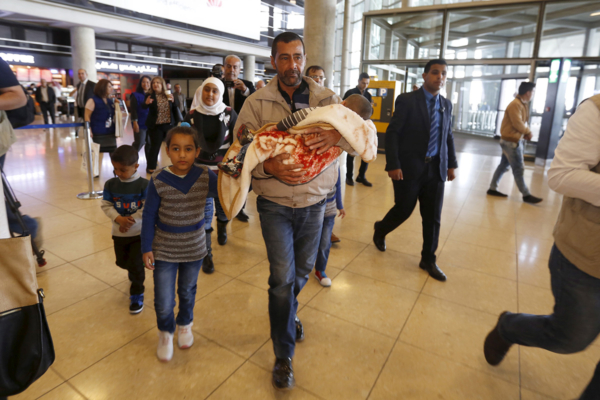 Syrian refugee Ahmad al Aboud and his family members, on their way to be resettled in the United States as part of a refugee admissions program, walk to board their plane in Amman, Jordan, in 2016. Photo: Reuters

Refugees face “the most stringent vetting process in the world,” Smith said. “Refugees who arrive in the U.S. have legal documentation, have been fully vetted and security screened, and represent one of the most resilient, hard-working, entrepreneurial, and successful segments of the population.”

The refugees who are resettled in the United States typically are fleeing war, persecution and other hardships in their home countries. The Episcopal Church first began assisting refugees in the 1930s and 1940s through the Presiding Bishop’s Fund for World Relief, supporting people from Europe fleeing the Nazis. Under the State Department’s program, EMM once oversaw 31 resettlement affiliates in 26 dioceses, but now that number is down to 13 affiliates in 11 dioceses.

The Episcopal Church’s General Convention regularly expresses its support for refugee resettlement, most recently when it met in 2018 in Austin. There, it passed a resolution that included a measure calling on governments “to expand refugee resettlement as a humanitarian response that offers individuals safety and opportunity.”

“Refugees bring immense value to communities throughout Texas,” The Episcopal Church said in its Jan. 11 statement. “They have invigorated the economy, brought innovation to small towns, and made communities stronger through their contributions to public life and cultural institutions. Refugees in Texas are students, entrepreneurs, dedicated employees, customers, elected officials, and community leaders – just like us. They are us.”