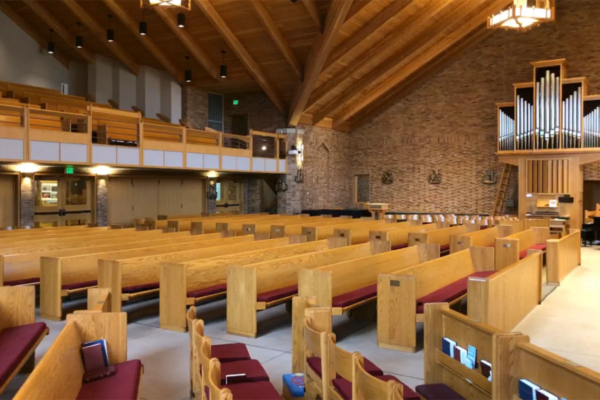 [Episcopal News Service] Christ Church in Denver, Colorado, entered the era of online worship at 10:30 a.m. March 15 with little more than an internet connection, a handheld iPhone and an order of service. Pews that typically held 350 worshipers on a pre-coronavirus Sunday morning were empty on this first Sunday of the COVID-19 pandemic. But Christ Church’s inaugural online service found its congregation. The video has been viewed more than 500 times on Facebook.

“We’re figuring this out on the fly,” the Rev. Terry McGugan told Episcopal News Service by phone. As rector at Christ Church, McGugan, who also serves as president of the Diocese of Colorado’s Standing Committee, stresses “adaptability and flexibility.” He doesn’t sugarcoat what empty pews could imply for individual churches and budgets.

Anticipating potential shortfalls, Episcopal leaders churchwide already are discussing ways to mitigate the financial impact of the virus and the disruptions to everyday life caused by efforts to slow its spread. Suspension of in-person worship services is widespread, and the challenge of maintaining plate-and-pledge income is compounded by the economy. A virus-fueled economic downturn is hitting some parishioners hard, McGugan said. His wife and 23-year-old daughter are among the many Americans out of work because economic activity is grinding to a halt.

As dioceses gently remind congregations to continue collecting offerings and pledges, Presiding Bishop Michael Curry assured dioceses “we will work with you” if assessment payments need to be rescheduled. Church Pension Group is waiving some parishes’ pension obligations for two months.

For their part, Episcopal parishes of all sizes are stepping up their use of online giving tools. McGugan’s congregation, one of the largest in Colorado is somewhat ahead of the curve. Christ Church started encouraging parishioners to pledge online a few years ago through a service called PushPay, an option already embraced by about a quarter of the congregation before the coronavirus pandemic hit.

Now, the shortfall caused by empty pews is adding urgency to Christ Church’s online collection efforts. The shortfall is substantial. On an average Sunday, Christ Church had been collecting as much as $25,000 from worshippers, McGugan said. On March 15, the total dropped to just $2,000 online.

In Baraboo, Wisconsin, a city of 12,000 in the mostly rural Sauk County, Trinity Episcopal Church operates on a much smaller scale, with about 65 pledging households and annual collections of just under $150,000. Before the coronavirus hit, Trinity didn’t have an online giving option. It didn’t even have the Wi-Fi needed to enable livestream services.

It has both now. But what puts the Rev. Dave Mowers’ financial mind at ease is a different resource: parishioners who can be counted on to pay their pledges, even when they can’t worship in their church.

March 22 was the first Sunday that Trinity was closed to worshipers. The week before, Mowers emailed them a Morning Prayer bulletin with announcements, including a reminder about pledges. “By Sunday, I had picked up a fistful of envelopes that I presumed to be checks,” he told ENS. “And it was a normal-size Sunday offering from just checks that got mailed in.”

The checks that Episcopalians write – and the pledges they make online – don’t just help parishes make ends meet. They also pay for parishes’ ministries in the community, and part of those collections are assessed by the dioceses and, ultimately, The Episcopal Church to maintain the broader work of the church.

“We must find gentle ways to remind people that the needs of our churches go on,” Kansas Bishop Cathleen Bascom said in a March 16 message to her diocese. “This may be a good time to investigate online giving.”

Eastern Oregon Bishop Patrick Bell’s March 17 message was more direct. “Even though we may not be meeting together, the operation of our churches continues, and that needs funding. I am mindful of empty offering plates sitting unused each Sunday morning,” Bell said.

He encouraged Episcopalians to mail in their pledges or adopt online options. “This needs to be a disciplined practice of our faith,” he said. “Please, please do not neglect your responsibility to financially support your church and your ministry during this time.”

Congregations are using a variety of tools to create online collection plates for offerings and pledges. Some popular ones are Vanco, Tithe.ly, Realm, Blackbaud and Giving 365.

Church of the Good Shepherd in the Northern California city of Cloverdale also began using Tithe.ly at its March 22 service.

“The website allows you to designate your gift as pledge or offering as well as for donations to the Memorial, Stained Glass, and Building Funds,” Good Shepherd said on Facebook.

The Diocese of Central Pennsylvania created an online resource through the service Giving Tools to enable all its parishes to collect donations there.

“A large number of our parishes did not have an online giving platform in place,” Alexis Guszick, the diocese’s canon for communications and events, told ENS by email. The diocese’s Giving Tools page now is being promoted on parishes’ livestreams and social media accounts.

In Bangor, Maine, St. John’s Episcopal Church is encouraging parishioners to give money by text.

The text-based giving is a feature of Realm, which St. John’s started using a while back to collect pledges online. “It’s been an under-utilized resource up until now,” said the Rev. Rita Steadman, rector at St. John’s.

Her parish has an average Sunday attendance of about 100, and like Mowers’ congregation, parishioners reliably pay their pledges, Steadman said. One went online recently and paid the pledge for the full year to help St. John’s up front with its cashflow.

“The bigger concern is probably people’s economic well-being,” she said. Her congregation is economically diverse, and “we have people who could be wiped out or knocked down for sure.”

On March 17, Curry issued a statement supporting decisions by diocesan bishops and parish priests to suspend in-person worship services, possibly including Holy Week and Easter, in response to warnings from public health experts that large public gatherings could accelerate the spread of COVID-19. More than 43,000 cases have been confirmed across all 50 states, including more than 500 deaths.

Curry followed up in a March 19 letter to bishops and their finance officers, acknowledging that the disruption of social distancing “affects us all spiritually and financially,”

“We are in this together,” he said three times in his letter. No “past due” notices will be issued for unpaid assessments.

Dioceses are required by church Canons to contribute 15 percent of their incomes as assessments to The Episcopal Church. Paid in full, those assessments would total nearly $90 million of the church’s revised $137 million budget for 2019-2021. Church officials were estimating about $5 million less in actual collections over three years, based on the number of dioceses that said, even before the coronavirus hit, that they couldn’t or wouldn’t pledge the full amount.

“It is premature to predict our responses to the financial consequences of the current emergency,” Curry said in his March 19 letter. “We will, however, do everything we can to support dioceses and parishes across the church. We invite your suggestions.”

Mary Kate Wold, CEO and president of Church Pension Group, repeated the “we’re all in this together” refrain in her March 23 message about the coronavirus. The two-month waiver of pension assessments is available to financially struggling parishes in states or regions where a disaster or state of emergency has been declared.

“Our hope is that this action will help alleviate financial strain in the neediest of parishes, help ensure that their clergy can continue to serve without fear of their pensions being reduced, and help support all of their employees and their ministry in this uncertain time,” Wold said.

She also said the church’s Medical Trust would waive co-pays, deductibles and coinsurance for evaluation and testing related to COVID-19.

Conditions across the United States have intensified this week, as several states from Massachusetts to California issued “shelter in place” or “stay at home” orders.  The goal of the orders is to limit travel to only essential destinations, such as grocery stores, pharmacies and hospitals, reducing the risk of disease transmission. As businesses shut down and Americans isolate at home, one side effects has been a surge in unemployment claims. The jobless rate could reach 30 percent, one Federal Reserve official predicted.

Churches will be called on to provide pastoral support for parishioners and neighbors who have lost their jobs and are rapidly depleting their savings, McGugan said. At the same time, churches will face their own financial struggles, with economic uncertainty driving all parishioners to consider reducing their charitable giving.

“It’s going to decimate smaller churches,” McGugan said, and even Christ Church is preparing for the worst. It has modest cash reserves but no multimillion-dollar endowment, McGugan said. He asked the church’s administrator to draft provisional budgets for three scenarios: 80 percent of annual income, 60 percent and 40 percent.

He hopes to be able to keep the church’s staff of 10 employed through the crisis, though their duties are changing to fit the immediate needs of the congregation and community.

Mowers, the Wisconsin rector, isn’t as concerned about the economy’s immediate financial impact on Trinity Episcopal Church. Most pledging families in his congregation are retired or else in sectors or professions that aren’t yet facing job losses.

Trinity, though small, is fortunate enough to be able to lean on an endowment of a little more than $500,000, “although it is 30 percent lower than it was three weeks ago,” he said, due to the falling stock market.

Even so, Trinity, like many congregations, is facing an uncertain future, and Mowers thinks the economic impact will be felt even after the public health crisis is over. It also may be harder for his parishioners to wrap their minds around the crisis when only a handful of COVID-19 cases have been diagnosed in the area so far.