Church leaders urge Episcopalians to strive for peace in wake of massacres in Texas, Ohio 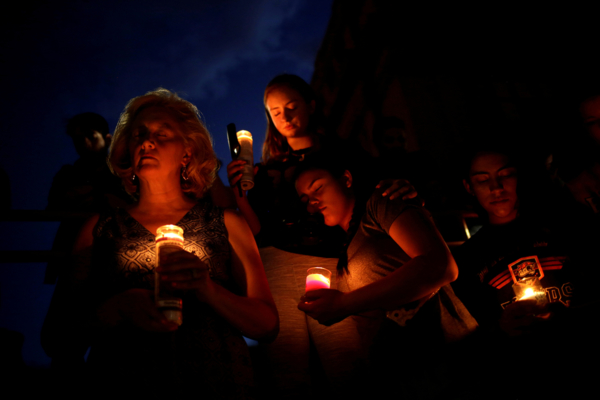 Mourners take part in a vigil Aug. 3 at El Paso High School after a mass shooting at a Walmart in El Paso, Texas. Photo: Reuters

[Episcopal News Service] Episcopal bishops are speaking out in the aftermath of back-to-back mass shootings in Texas and Ohio, offering prayers, conveying the grief of their dioceses and hoping for a future when American life will no longer be plagued by such sudden bursts of deadly gun violence.

“Jesus said blessed are the peacemakers, and we in the church are called to make peace in our neighborhoods and with our young people,” Diocese of the Rio Grande Bishop Michael Hunn said in an online video reacting to the Aug. 3 massacre of 20 people at a Walmart in El Paso.

A 21-year-old man has been arrested in the killings and is suspected of posting a racist, anti-immigrant manifesto online before opening fire.

“My heart is heavy this morning with the tragic shootings yesterday in El Paso and last night in Dayton,” Southern Ohio Bishop Tom Breidenthal said in a Facebook post on Aug. 4, hours after a gunman opened fire in an entertainment district in Dayton. Police shot and killed the gunman, a 25-year-old man, whose motive wasn’t immediately clear.

Breidenthal, while offering prayers for the victims and those affected by the shootings, lamented that this was the second time in a year that his diocese was in mourning after a mass shooting in one of its cities. An attack in September left three victims dead and two others wounded in Cincinnati.

“Please join me in praying for an end to the epidemic of hate and violence that is sweeping our country,” he said.

Hunn and Breidenthal are part of Bishops United Against Gun Violence, a network of nearly 100 Episcopal bishops that formed in the wake of two high-profile mass shootings in 2012, at a Sikh temple in Wisconsin and at Sandy Hook Elementary School in Connecticut. The bishops’ mission has taken on a greater sense of urgency amid the growing national alarm at subsequent tragedies.

The Bishops United’s Litany in the Wake of a Mass Shooting was updated on Aug. 4 and now remembers the victims of 43 shootings since 2012.

Connecticut Bishop Ian Douglas read the litany in a Facebook video after the El Paso and Dayton shootings, noting that Aug. 5 marks seven years since the Sikh temple shooting.

“This litany is a prayer offered for all the mass shootings, all the victims of mass shootings since Bishops United Against Gun Violence has come together,” Douglas said.

Douglas and other leaders of Bishops United planned to discuss a further response to the recent shootings later Aug. 5, after attention was focused in the morning on a statement read by President Donald Trump from the White House.

“We ask God in heaven to ease the anguish of those who suffer, and we vow to act with urgent resolve,” Trump said in his 10-minute remarks.

The president also forcefully denounced racism and hatred, saying neither has a place in America, and he enumerated four potential policy responses – their focuses included violent video games and mental illness – that could reduce the “barbaric slaughters” he said were carried out by “mentally ill monsters.”

Trump avoided calling for any substantial gun safety reforms, and it remains to be seen whether the shock of the recent violence will push the needle in Washington further toward such legislation. As the list of mass shootings has increased, legislative remedies have gone nowhere in Congress.

The Episcopal Church’s General Convention has passed numerous resolutions over the years calling for tighter gun laws. A resolution passed in 2015 included calls for universal criminal background checks for gun purchases, a ban on military-style assault weapons and high-capacity magazines, tougher enforcement against gun trafficking and requirements that gun owners be trained in gun safety. In 2018, bishops and deputies passed a new resolution recognizing gun violence as a public health issue.

With the recent focus on tragedies in El Paso and Dayton, Episcopalians churchwide have joined in mourning the victims of the recent shootings. Chicago Bishop Jeffrey Lee issued a statement on Facebook in which he prayed “for the strength and commitment to stand up against the corrosive power of hateful speech and the insanity of all too available guns.” Northwestern Pennsylvania Bishop Sean Rowe sent a letter to his diocese urging Episcopalians not to give up hope.

“I invite you to pray in response to these evil acts – not as a substitute for action, but as a precursor to it,” Rowe said.

Arizona Bishop Jennifer Reddall was among the speakers Aug. 4 at a vigil for gun violence victims in Phoenix.

“You cannot be a white supremacist and be a Christian,” Reddall said, according to Arizona Republic’s coverage of the event. “You cannot love Jesus and hate your neighbor. And if you say you do, you’re wrong.”

And while people of faith pray, Reddall called on politicians to do more than pray. “I want you to do your job, which is to act,” she said.

The post Church leaders urge Episcopalians to strive for peace in wake of massacres in Texas, Ohio appeared first on Episcopal News Service.

This post appeared here first: Church leaders urge Episcopalians to strive for peace in wake of massacres in Texas, Ohio