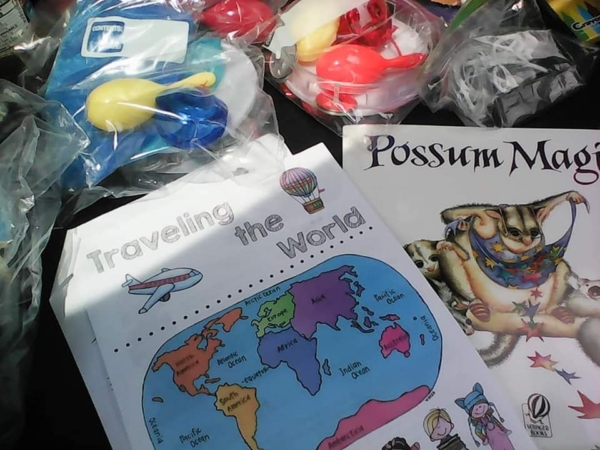 Activities are ready for distribution in the Highland Educational Project’s first Camp in a Box, offering children a visit to Australia. The boxes, distributed over the summer in McDowell County, West Virginia, featured stops in all seven continents. Photo: We Are The Teachers

[Episcopal News Service] When the pandemic disrupts, ingenuity sometimes blooms. In rural West Virginia, the result this summer was Camp in a Box, an Episcopal initiative serving dozens of children in one of the poorest counties in the United States.

Highland Educational Project, a ministry of the Diocese of West Virginia, had been planning to launch a nine-week, in-person summer camp program for children who, for various reasons, were being raised by relatives other than their parents. The diocese received a $10,000 Roanridge Trust grant this year from The Episcopal Church to support such families engaged in what is known as “kinship care.”

Then the coronavirus pandemic hit, forcing administrators to cancel, limit or reimagine Episcopal summer camps across the church over fears of spreading COVID-19. The Highland Educational Project team then shifted to a pandemic-ready alternative. Each week for seven weeks, participating families in McDowell County received boxes filled with a range of activities and supplies for exploring one of the world’s seven continents.

Many of the children haven’t had opportunities to travel far beyond their home community, said Mary Green, Highland Educational Project’s coordinator. “We wanted to create something to help them see there is so much out there to explore in life and … different cultures,” Green told Episcopal News Service.

The shift to Camp in a Box also allowed Green and her team of partner organizations and volunteers to expand their pool of participants among the students of Kimball Elementary School. In addition to serving 33 children in kinship care situations, school administrators helped identify nearly 70 other students whose families would benefit from extra support.

So, when Camp in a Box kicked off on July 10 with an invitation to explore Australia, Highland Educational Project distributed customized boxes to 39 families with more than 100 young explorers waiting to see what camp fun was contained within.

Inside each week’s boxes, the children found books, science experiments, suggestions for physical activities and art projects – koala art was featured during the Australia week – as well as recipes and ingredients for a meal the family could prepare at home. Highland Educational Project also supplemented the boxes with a welcome kit mailed to the families. The kit included a wall map, passport and journal for recording the children’s travels around the world.

And each family received a digital audio player that was loaded with recordings of a teacher reading the featured books out loud. The audio player also contained music from the continents visited by the students in their imagination, and they were encouraged to recreate some of the music at home with makeshift instruments.

Green said the focus on helping kinship care families stemmed from the stories she had been hearing from residents, educators and social service providers. “These children, they’ve gone through traumatic situations that have landed them in a home not with their parents,” Green said.

She didn’t have detailed information on the reasons most parents are absent, but some cases involve parents who have been incarcerated. She also noted that drug use often is an underlying problem among individuals and families in the region.

McDowell County, with a declining population of about 20,000 people, is positioned on the Virginia state line and just east of Kentucky. It is a region of Appalachia that once rode the fortunes of the mining industry, but now, after years of coal mine closures, it is struggling with unemployment, drug addiction, water quality issues, deteriorating homes and failing infrastructure.

The Diocese of West Virginia’s Highland Educational Project has served these communities for more than 70 years, providing food, clothing, help with utility bills and other basic assistance. Such efforts had stalled in recent years, resulting in the ministry’s temporary closure in 2018 amid a leadership transition.

Green, who also serves as the diocese’s communications coordinator, took over in April 2019 as Highland Educational Project’s interim director and has renewed ties with local partner organizations, such as the community group WATT, which stands for We Are The Teachers. The group provided volunteers for Camp in a Box distribution and promoted the ministry regularly on its Facebook page.

“No better way to grow the mind, spark curiosity and instill hope in a child than to travel and see the world,” the group said in a post announcing the first distribution on July 10.

Each week, Green and her husband, with the help of volunteers, assembled the boxes at their home in Charleston, West Virginia’s capital. With a list of the 39 participating families, they filled specially labeled boxes with a customized mix of items and loaded the boxes into Green’s Volkswagen Jetta and her husband’s Subaru Forester.

Every Friday morning, the Greens drove more than two hours south to the tiny city of Keystone, just east of Kimball. After unloading the boxes in the City Hall parking lot, Green’s husband drove back to Charleston while Green stayed to oversee distribution. Families could drive up and have volunteers load the boxes into their car trunks. For families who couldn’t make it to the pickup location, Green delivered their boxes right to their homes.

It made for a long day, but Green described the experience as “one of the biggest blessings I’ve ever had in my life.”

She also hopes this experience has laid a foundation for future growth in the Highland Educational Project’s efforts to serve these families, throughout the pandemic and when the crisis is over. Students return to school on Sept. 8, some in person and others online. Ministry volunteers already have delivered gift bags for school staff members who are preparing to receive students, and Green is planning to offer short online reading sessions for Camp in a Box graduates starting in October.

And Green is already looking ahead to next year’s summer camp options.

“I believe that the benefit of what we did this year can help us, hopefully, in 2021 we will have a much more hands-on camp, where the camp counselors do come in and we have built trust with the families and the school and the community as a whole,” Green said, “that we can do something next year that might look more like what we hoped it would this year.”