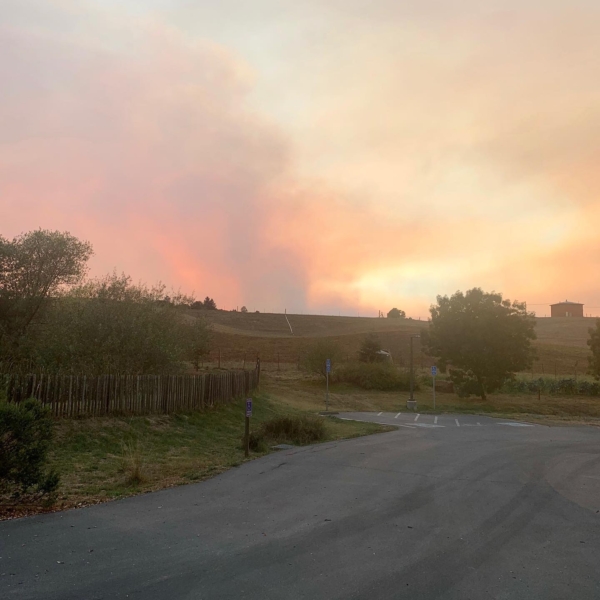 [Episcopal News Service] For the second year in a row, a wine country camp and conference center owned by the San Francisco-based Diocese of California has narrowly escaped damage from wildfires, which over the past week got as close as a half-mile from the property.

The Bishop’s Ranch sits on 360 acres among the vineyards of Sonoma County, north of San Francisco, in the Diocese of Northern California. Normally it holds retreats, summer camps, conferences and other gatherings, hosting up to 150 people at various buildings around the property, including a historic Spanish-style villa. Because of COVID-19, all on-site programming had been canceled in March, but the ranch had just reopened for socially distant weekend retreats on Aug. 14.

That very first weekend, a series of lightning storms knocked out power and sparked wildfires that have been raging across the region since, burning hundreds of thousands of acres and destroying thousands of buildings in the dioceses of Northern California, El Camino Real, San Joaquin and California, killing at least five people.

One of the fires, the Walbridge Fire, got close enough to the ranch by Aug. 19 to prompt the evacuation of residential staff. Acting Executive Director Aaron Wright, his wife and their three sons went to stay at a friend’s home, awaiting word on the ranch’s fate.

“It seemed like it was at its height – we were most nervous on Saturday because it really seemed to be picking up ground toward the ranch property,” Wright told Episcopal News Service. The flames came within a half-mile of the back of the property and a mile and a half of the buildings, he said.

The ranch “goes from very dense woods to the buildings, and that is all connected to the forests that are burning right now,” Wright said.

Although the fire continued to grow rapidly, firefighters worked to keep it from spreading toward the ranch, and as of Aug. 25, the worst of the danger seemed to have passed.

“We are optimistic at this point that they’ve held it off,” said Wright, who was able to return to the ranch for half an hour on the 25th to check on it. The property was “remarkably intact” despite lots of ash, he said.

The situation in Northern California has improved this week, with higher humidity helping firefighters’ efforts. As of the afternoon of Aug. 26, the large group of fires including the one threatening the ranch was 27% contained.

Last October, the ranch was evacuated due to the Kincade Fire, though that didn’t come as close as this one, Wright told ENS.

Though the buildings are safe for now, the financial havoc caused by COVID-19 and the fire will be “very hard” to recover from,” Wright said. The ranch had sold out all its weekend retreat spots for the next several weekends; now everything is canceled at least through Labor Day.

“We’d been closed for five months,” Wright said. “We’re looking at a huge loss, as many people are because of COVID. We had just rehired some staff to reopen.”

Another Diocese of California property, St. Dorothy’s Rest, was also evacuated but was not as seriously threatened as the ranch was, according to Wright. None of the Episcopal churches in the sparsely populated area appear to have suffered any damage, although one shared an emotional letter from a parish family whose house was destroyed.

“As fire and smoke impact our every movement, please know that we stand together in prayer, remembering that Jesus the Good Shepherd walks with us always,” Northern California Bishop Megan Traquair wrote to her diocese. “We are a strong and resilient diocese, and we know this path well.”

California Bishop Marc Andrus and El Camino Real Bishop Lucinda Ashby offered prayers for the victims of the fires, for those forced to leave their homes and for the firefighters.

“Please know that you are very much on my heart as you not only continue to show incredible courage and resilience through the ongoing pandemic but now also face a new round of fear and uncertainty brought on by the outbreak of hundreds of local wildfires,” Andrus wrote to his diocese.

“I am thankful for firefighters — professionals, prisoners, and volunteers who work tirelessly and courageously to protect life and land,” Ashby wrote on Facebook. “May our gratitude make us more patient, more loving, more kind.”