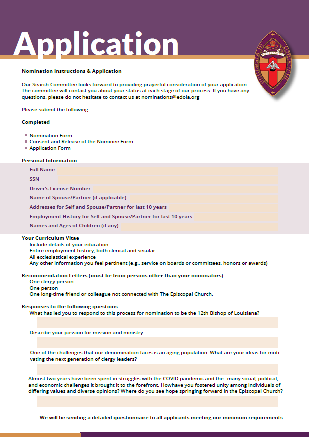 The nominations period closed on December 31.

Each nomination must be made by one (1) canonically resident clergy, one (1) lay person, both resident in the diocese of Louisiana and one (1) bishop. Other communicants in good standing or members of the Search Committee may not nominate or second. Any clergy member of the Search Committee who is nominated will resign from the committee and its subcommittees.

How to Make a Nomination

The Co-Chairs of the Search Committee will receive nominations from Monday, November 8 through Friday, December 31, 2021. Each person proposed for nomination must give his/her written consent in order to participate in the election process and give permission for a background check to be made by the Oxford Document Management Company. Copies of the official nomination form will be available online on November 8 or from the Co-Chairs. Nominations from the floor are not allowed. Completed nomination forms should be emailed to nominations@edola.org or mailed to Jay Albert, dcn., 335 Carr Drive, Slidell, LA 70458, for arrival no later than Friday, December 31, 2021.

The committee will continue its confidential work by reviewing the applications, subsequent questionnaires, interviewing, holding a group retreat and selecting a final slate to present to the Standing Committee.