Anglican Primates meet with king, heads of church in Jordan 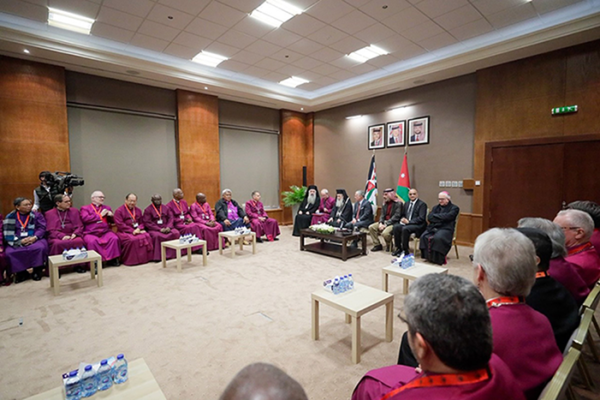 Anglican Communion primates met Jan. 13 with the King of Jordan at a conference center near the site of Jesus’ baptism. The primates are meeting in Amman, Jordan, Jan. 13-15. Photo: Jordan News Agency

[Episcopal News Service] Anglican Communion primates began a weeklong meeting Jan. 13 with an official audience with Jordan’s King Abdullah II. The audience took place at a conference center near the site of Jesus’ baptism, and was followed by a wider gathering featuring the heads of churches and other Christian leaders.

“The gathering of the primates of the Anglican Communion brings together the archbishops, presiding bishops and moderators who are spiritual leaders of the provinces that make up the Anglican Communion. We’ve gathered here in Amman, Jordan as guests of Archbishop Dawani Suheil, our good friend,” said Presiding Bishop Michael Curry in an email to Episcopal News Service.

“We had an audience with King Abdullah yesterday and time with Orthodox leaders and other Christian leaders in the Land of the Holy One. The purpose of the gathering of Primates is always for fellowship and prayer as our way of engaging the needs of the world as people following the way of Jesus. As the week goes on there will be more to report, but we gather in the spirit of Christ in the Way of Love.”

Leaders of 36 of the Anglican Communion’s 40 member churches are gathered in Amman, Jordan, for the Jan. 13-15 primates meeting. The meeting is taking place in advance of the 2020 Lambeth Conference, to be held July 23 – Aug. 2 in Canterbury, England.

The Primates Meeting is one of the three Instruments of Communion, the other two being the Lambeth Conference of bishops, which takes place approximately every 10 years, and the Anglican Consultative Council, the communion’s main policymaking body. The primates last met in Canterbury in October 2017.

(Who are the primates and what is the Primates Meeting?)

On Jan. 14, King Abdullah was accompanied by Prince Ghazi bin Muhammad, the senior adviser to the king for religious and cultural affairs. He told the Anglican leaders that Jordan is committed to its historical and religious role in protecting Islamic and Christian holy sites in Jerusalem.

The king said it was important to confront any attempts that would change the historical and legal situation in the Holy City of Jerusalem, and said that Jordan would continue to promote the values ​​of dialogue, tolerance and brotherhood among religions. Christians, he said, are an inherent component and an integral part of the fabric of the region.

Archbishop of Canterbury Justin Welby said it was “a great honor” to be received in audience by King Abdullah. He explained that the primates had been discussing the forthcoming Lambeth Conference of Anglican bishops and said: “We are looking at issues of climate change – very relevant here in the Jordan Valley and around the shrinking Dead Sea. We are seeking to see how to support peace in this region, grateful for the examples of yourself and this kingdom.

“We seek to raise the awareness of the issues of refugees and migrants globally, where Jordan sets an example to the world. We are especially concerned about the plight of Christians in this region and other numerous areas where they suffer. Jordan is a shining example of good practice, where Muslims and Christians practice their faith freely and without fear.”

Jordan is part of the Anglican-Episcopal Diocese of Jerusalem, which, Welby said, “under the leadership of its archbishop, His Grace Archbishop Suheil Dawani, is heavily involved in building peace, and in the long-term work of education and health. It has hospitals and clinics across the area, including in Gaza, and more than a dozen schools, including schools for the deaf, blind and those with special educational needs. This action on health and education is a best example, and typical of Anglican ministry in all its provinces.”

The Primates Meeting began Jan. 13 and will continue through Jan. 15. On Jan. 16-17, the primates will undertake pilgrimages and spiritual retreats in Jordan, Jerusalem and Bethlehem.