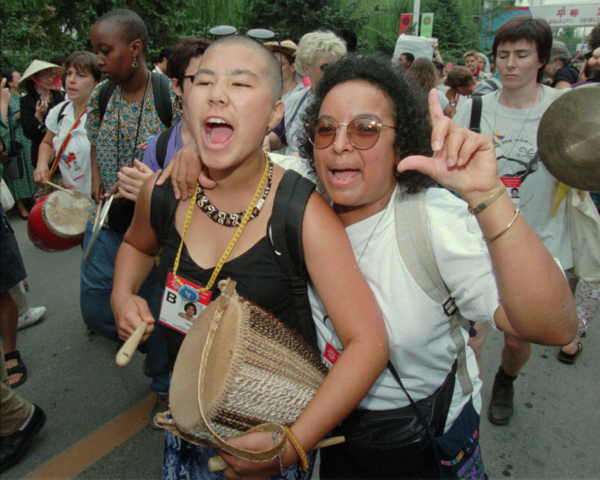 Delegates sing and chant during a march to demand equal rights at the NGO Forum on Women in Huairou Tuesday, Sept. 5, 1995. The group and its supporters presented their demands to the Fourth World Women’s Conference on Women. Photo: Mike Fiala/AP

[Episcopal News Service] By the last weekend in February, Presiding Bishop Michael Curry’s delegation had been preparing for three months to travel to the 64th United Nations Commission on the Status of Women.

In 2020 the event, which annually draws thousands of women from around the world to U.N. headquarters in New York, was meant to mark 25 years since the Fourth World Conference on Women and the adoption of the Beijing Declaration and Platform for Action. The document offers a framework for uplifting and empowering women to advance gender equality worldwide.

As February wound down, the U.N. began announcing precautions to prevent the coronavirus from spreading at the scheduled March 9-20 gathering. Then on Sunday, March 1, New York City announced its first confirmed COVID-19 case. The next day, the U.N. shortened CSW64 to a one-day event for New York-based delegates only, canceled all accompanying events and indefinitely postponed the UNCSW64 / Beijing+25 celebration.

“It was unthinkable,” Lynnaia Main, The Episcopal Church’s representative to the U.N., told Episcopal News Service. Shortly thereafter the members of the presiding bishop’s delegation, eight delegates and a six-member UNCSW leadership team (Main among them) gathered via conference call. “I will never forget that conference call,” Main said. “It was just depressing. We just couldn’t believe it.”

With no contingency plan, the group continued their conference call meetups. In that forum, the leadership team suggested taking “a deep dive” into the Beijing Platform for Action, “in our context now,” said the Rev. Margaret Rose, The Episcopal Church’s deputy for ecumenical and interreligious relations and a member of the leadership team. The delegates agreed, and created the online study group: “Beijing+25: Celebrating the Blessing, Realizing the Dream.”

Those areas are more important now than they were 25 years ago, said Ann Smith, former head of The Episcopal Church’s now-defunct Office of Women’s Ministries. “The status of women has declined in many countries,” she said. “There’s not one country in which there’s true women’s equality. The Nordic countries come close, but they’re not there.”

The Beijing+25 study group is available to all Episcopalians, not only UNCSW attendees — and is part of a tradition of Episcopal and Anglican women attending U.N.-organized women’s events since before the Fourth World Conference in Beijing.

Smith, who has attended UNCSW since 1984 and coordinated Episcopalians’ presence in Beijing in 1995, sees the conference as a unique women’s gathering place. “It is the only place in the world where this happens,” she said. “It is an incredible exchange of information and resources, and relationships are formed.”

In preparation for the 1995 Beijing conference, Smith went to London to collaborate with members of the Mothers’ Union on the Anglican and Episcopal churches’ priorities. A daily noonday prayer was part of the women’s rhythm there. Smith then traveled to Vienna for a conference preparatory meeting, where she felt a deep spiritual calling. When Smith returned to the United States, she heeded that call and told fellow organizers, “We need to do a noonday prayer, but it needs to be bigger. It needs to be interfaith.”

She co-wrote the prayer with Office of Women’s Ministries colleague Sr. Helena Marie, Bahá’í representative Florence Kelley, and World Day of Prayer International Committee Executive Director Eileen King. “It really was the work of the holy spirit,” Smith said. “It really just took off.” Postcards with the prayer’s text printed in multiple languages were prepared and some distributed ahead of the conference. Activists Bella Abzug and Gloria Steinem read the prayer at a news conference before traveling to Beijing, Smith said.

Part of the Fourth World Conference in Beijing was an NGO forum for all conference participants. Roughly 30,000 people, mostly women, attended the event, which took place 35 miles from Beijing. There, attendees could recite the noonday prayer in the peace tent. On Sept. 6, then-First Lady Hillary Clinton spoke at the forum, having declared in Beijing that “women’s rights are human rights.” She ended her speech by holding up the postcard and reading the Beijing Noonday Prayer.

Rose later co-organized Beijing Circles out of the Office of Women’s Ministries. The aim was to engage Episcopalians in discussions and work in their communities around the Platform for Action’s areas of concern.

While the Beijing Circles have since gone fallow, some members of this year’s leadership team sense their spirit rekindled in the Beijing+25 online study group. Main said that, when UNCSW64 was canceled, the presiding bishop’s delegation and its leaders initially thought, “Why don’t we at least have an online meeting to share what we’ve learned about the platform?” Even without a conference to attend, this would allow delegates to fulfill the final charge of their UNCSW commitment: to return to their respective Episcopal church provinces and share what they’d learned.

In July, the delegation hosted an opening webinar to tell the story of the Beijing platform and its intersection with The Episcopal Church. Two more webinars are scheduled: one on Sept. 24 and another in November. Meanwhile, delegates are writing blog posts about each of the 12 areas of concern. “It’s going really, really well,” Main said. “There is such a hunger for resources and sharing ideas.”

Some 90 people attended the first webinar; of those, approximately one-third live in Province IX, representing seven countries in Latin American and the Caribbean. “We have been able to reach a much wider audience than we had before,” said leadership team member the Rev. Glenda McQueen. “I think Beijing is extremely relevant to the life of women in Latin America.”

Lack of access to health care, education and decision-making power and the presence of violence compelling people to leave their homes affect women in Latin America, said McQueen, who also is the church’s partnership officer for Latin America and the Caribbean.

The “Beijing [platform] speaks about all of those things,” she said. “So when women do not have access to work, to jobs, to putting up their own businesses, the family suffers because women are the ones who make sure that their family has health services provided.”

While these issues impact women in Latin America, the Beijing Platform is relevant to cultures throughout the world, McQueen noted. That includes the United States, Smith and Rose pointed out. In the past, when taking part in Beijing Circles, Smith recalled, “I would get frustrated with U.S. women because we had all the resources and we were not doing what the women in developing countries were doing.” She recalled thinking to herself, “‘Where is our pioneer spirit? Where is our activism?’ You know, why are we just being so lackadaisical about improving the status of women? These other countries were all heart and soul and working so hard for this.”

Twenty-five years on, Rose sees the Beijing platform as even more valuable, with greater potential to catalyze change in the United States now than in 1995. The country, she said, is experiencing great political polarization, but “Beijing sort of cuts through those political differences to ask the questions around hunger and poverty that, really, you could talk about without having to talk about political parties.”

Moreover, the COVID-19 pandemic influences the online study group and the Beijing platform, which Smith calls a “living document.” The pandemic “changes everything,” Rose said. “And I don’t think we know how to analyze that yet.” For example, in Latin America and the Caribbean, the coronavirus and measures to stanch its spread have increased women’s and children’s vulnerability to inequity and abuse, McQueen said.

Whatever comes of “Beijing+25: Celebrating the Blessing, Realizing the Dream,” the opportunity to study the 12 areas of concern also offers Episcopalians a reminder, according to Main. “The church has much to learn from the world, and if we are not part of that conversation, we are missing an opportunity,” she said. “We are not just a little bubble. We are not just a little island.”

– Heather Beasley Doyle is a freelance journalist, writer and editor based in Massachusetts. She has previously written about education and racial reconciliation for Episcopal News Service.